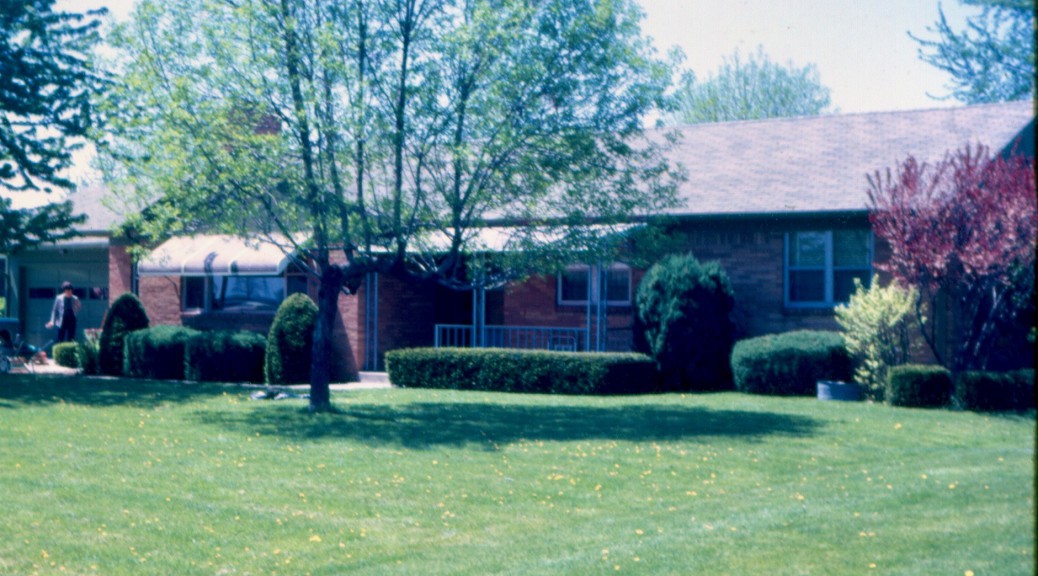 Good old wintertime! We took some time out to help celebrate Mother’s birthday today. Debbie and Greg were eager to help blow out the birthday candles.

This winter gave us time to finish our interior painting and the entryway Vermont slate flooring addition.

We also swapped out some ceiling light fixtures and began hanging wall decorations. The Kitchen table we made while in Pendleton made its way to the family room. We found some heavy, ornate cast-iron bench legs and fastened pine boards to them to form a corner bench for the table. Carole selected some upholstery material and covered the benches before we fastened them to the walls.

Franklin Elementary School pihotos finally arrived and we had our first school pictures to eagerly pass around and add to the growing photo album.

March must be picture month, because we also received Debbie`s dance recital photo. She is the second from the left…the cutest one! She had been enrolled in dance class before we moved to Scatterfield and really took to it. It is developing into tumbling and gymnastics, which she constantly practices.

Easter arrived and it was time for the annual dress up time. A visit to Mother and Dad`s for an outdoor Easter egg hunt was fun for all.

Note the old quanset hut in the background and the stone  fireplace Dad built. 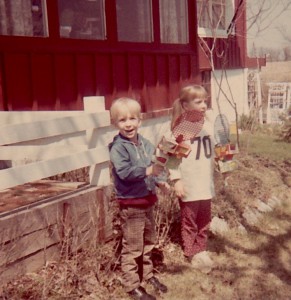 This was just behind the sunroom addition which was added onto the den.

Dad hung a new swing on a very high tree branch down by the pond.Carole had to try it out.

Back home we continued the Easter egg hunt and Greg enjoyed his new Easter present of a tractor.

This Spring, I was still working the dreaded second shift in the Guide tool room. I had just completed  my very first progressive die project as a journeyman. It was a progressive form, punch and trim die to produce a parking lamp housing. It came in under hours and cost which gave me a feeling of satisfaction. The photo is not my die…we were not allowed cameras in the plant, but it is the same type and configuration.

Not long after we ran the die in production to check it out, I was again offered the opportunity to work in Tool Design. With day shift hours and overtime, of course I accepted. So, after completing a final tooling process, (building), I was now on to start work on the beginning tooling process (designing).

With May, came many projects for the two Wolff Dens. Carole started the refinishing work on some old kitchen spindle back chairs,  and Greg helped me with thatching the lawn. 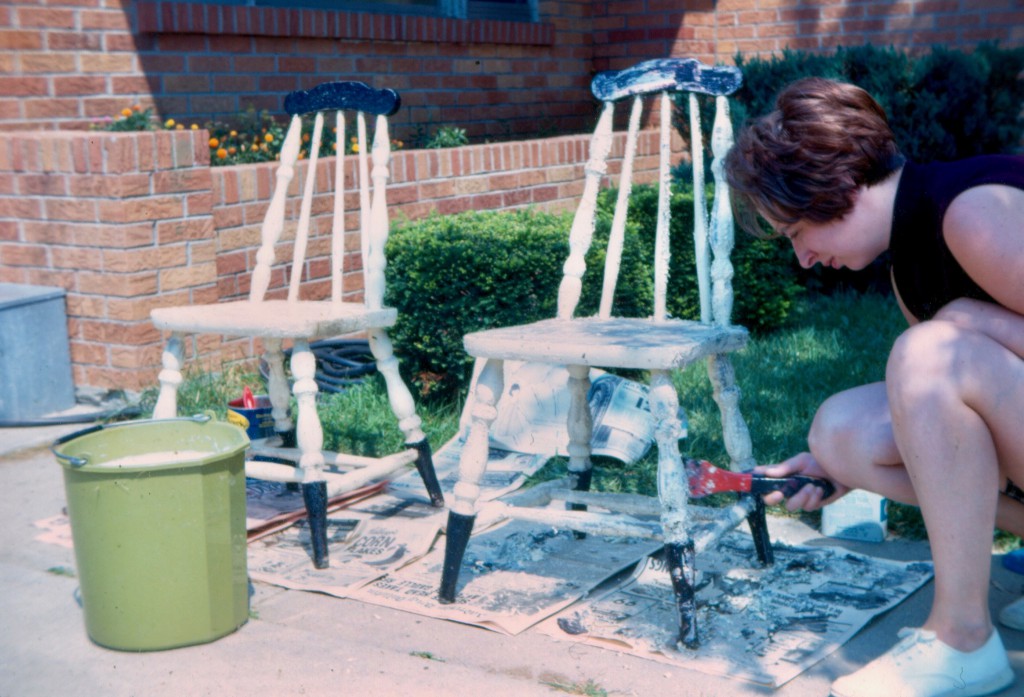 Note the Best Ever milk box just to the left in the picture. Yes we still had home delivery of dairy products for a while yet!

Now over at the senior Wolffs Den, Dad was upgrading the birdbath and fence area out by the willow tree. They had located some old heavy wagon wheels and wanted to incorporate them into the fence line.

Dad and I took a little trip to visit Grandma Wolff at her new assisted living residence in Indianapolis.

During a Memorial Day cookout, Esther thought she could strike a pose behind the magnolia bush and not be caught on camera! Today was also the day for opening the pool and   croquet.

The kids have been asking about getting another dog. Boy, with everything else that`s going on right now do we need another project?  Well the decision was soon made when a fellow worker said

he had two Scotty pups left from a recent litter. They were three months old and reasonably priced. Question answered. We named him Cappy.

The Barretts were still gardening and raising beautiful flowers.

Debbie`s first grade school year is just around the corner and she is growing literally with leaps and bounds. We decided she had outgrown her small bike and it was time for the next size up. So she was surprised with her new banana seat bike for her 6th birthday.

There was a birthday celebration at Esther’s with the Laws family and then on to the Wolff`s for more cake and presents.

During my time in tool design I was offered the salaried job to be a full time tool designer. Being a day job, I decided to try it. I could always go back to the tool room if it didn’t work out. After designing several dies for the sheet metal area they had me work with a senior designer on a plastic mold design.

However, as the slow season began to limit our work load, Guide Lamp began to layoff several salaried engineers and designers and I was included. Well back to second shift.

It was during this time that I decided to take advantage of a Purdue degree program which would give me academic credits for my work experience and apprenticeship classes. Plus Guide Lamp would pay for my tuition costs!

Greg`s birthday was celebrated with much fanfare…but this was the only photo!

On Halloween, we took the kids with their cousins trick-or-treating around the neighborhood and visits to family.

Fall was also time to head back to the toolroom from design. As much as I hated second shift, it felt good to get my hands on actually building something,,,and the overtime also helped.

Mother had been researching the Barrett and Augenstein family genealogy for quite some time and was now putting it into book form to publish. Mother’s printing business came in handy for the printing and publishing.  Carole helped with some of the typing, correlating, and book binding to have the paperback books ready for Grandpa and Grandma Barrett`s Christmas. Of course the kids helped too!

As if Mother didn’t have enough on her plate, she had also added an antique shop in the second den.

The Barretts got together for another family photo this fall. Left to right; Marg, Walt, Gerrie, Marvin, Arthur, Hildred, Jay, Dorothy, Jim, Jen, May and Fred.

We managed to pull things together and have the family Thanksgiving at our Wolffs Den this year! The family room pool table with the ping pong table on top served for our dining room.

Of course we had to continue the traditional kids table for Debbie, Greg and the cousins.

Ahh, winter and a crisp smell of Christmas in the air. Christmas day begins at our house early in the morning. The bright photo flood lights set up for the 8mm movie camera to capture the festive mood with everyones hands over their eyes to prevent flood light blindness!

Debbie was surprised with an electric organ. It also brought back memories to Carole of when she took piano lessons.

Greg enjoyed his new Big Wheel and couldn`t wait to get it outside!

Now it was off to the Wolffs for another Christmas!

Of course we had to check out the fire truck for Greg to make certain it worked properly!

There were presents galore and a good time was had by all!

Debbie got her first camera, a Kodak Instamatic! 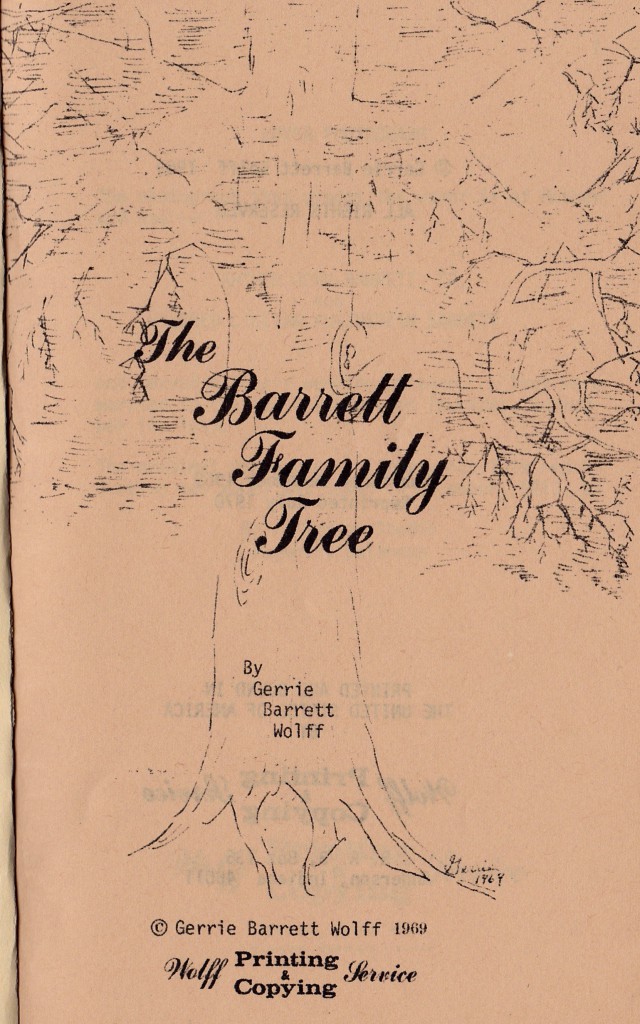 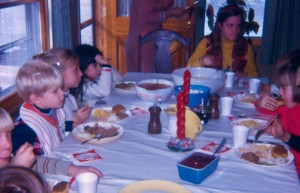 Now over to Grandpa and Grandma Barrett`s house for the Barrett Christmas dinner and the omnipresent kids table!

Then it was off to Esther`s house for the Laws family Christmas exchange and dinner.

The next day saw plenty of sunshine and the kids were out and about playing. I did get them to stop for a minute to pose for a photo.

That afternoon Dad and I went to visit Grandma Wolff. She had her Christmas decorations up for display.

We had a snack and exchanged presents with Grandma. Then it was back home and   relax time with my family.

Going back to work. Still on second shift. Still working overtime. Starting the Purdue semester at IUPUI with two classes. The new year is on the way and we look forward to what`s coming our way.