During the winter months, Debbie showed interest in her electric piano and we decided to pursue piano lessons. We then found a vintage upright piano at a reasonable price. One of my fellow tool room workers had a working hobby of piano tuning and repair. He came over and checked out our piano and said it only needed a few minor tuning peg repairs. We had those repaired and then tuned and Debbie was on her way.

We decided to update the stove to match the avocado green fridge and portable dishwasher. Carole enjoyed the long phone cord I added to our land line, (our only line)!

We also decided to join some of our friends and take square dance lessons this winter. After a few months we graduated and received our Rambling Hoosiers name badges!

Mother and Dad decided to sell the Barn House and the realtor strongly suggested the property be sold as a total package, which meant Grandpa and Grandma Barrett would have to sell also. Grandpa`s arthritis in his hip was now requiring a cane or walker to help his mobility.

They discussed moving to a smaller place in northern Indiana to be near their other kids and grandkids.

Back to our other decisions this year. The UAW local agreement was settled and one of the demands that was agreed to was about to impact me. The agreement involved my tooling group and the process organization. Process engineering had a group of classified workers that built paint shields and material handling tools. They wanted to be classified tool makers and they were put in a tool maker classification following the settlement.

Even though Mother and Dad decided to sell the homestead, their natural instinct to constantly improve drove them to complete past planned projects. This included getting a burrow and her little one. That was the reason for the higher fence down the back field!

Adding a corral fence across the back field was in the plans.

This must have been the year of the fence, as a new fence was added to the back yard fish pond.

Not to be outdone, new fence was extended down the curve of the drive.

The finishing touch was to add and spread tons of crushed stone on the half mile of driveway.

We found out from our neighbors son that there was a youth baseball program for 6 and 7 year olds. It was T-Ball, where the batters hit a baseball off of a rubber “T” set on home plate. The age limit required the player to be 6 years old to join the league in April, so Greg would have to wait until next season to join. But, practice began!

A tetherball pole was added to the backyard playground and competition among youth and adults got fierce!

Mother and Dad were still maintaining and improving the Barn House. This included the frequent cleaning of the family room fish pond.

Dad was busy finishing building the wood awnings for the upper windows. Completed the painting and started hanging them.

My transfer request for tool maker was approved and I moved my toolbox and things to my new department 345 paint shields. My first order of business was to submit a shift preference request for day shift.

Meanwhile, unbeknownst to us, Esther had entered a drawing for a pop up tent trailer camper at the local grocery store. SHE WON! She had to decide whether to keep it or sell it. She wanted someone to get some good out of her good fortune and since we were the only ones in the family that were interested in camping; we got the honors.

I added a trailer hitch and light harness plug to the 66 Chevy station wagon and with Ester we picked up her prize! We started off with picnic lunches and a cooler for day trip outings to nearby state parks. Soon we added a propane cookstove, lantern and porta-potty for overnight outings.

Debbie still has her cast on for her fractured wrist. She and some of the neighborhood kids were playing in the back yard, climbing the fruit trees. In the process, one of the kids pulled her down from the tree and she landed awkwardly on her arm. No child abuse investigation!

After much discussion and negotiating, Mother and Dad purchased Grandpa and Grandma`s “Ravens Roost”. Grandpa and Grandma then moved to a house close to Aunt Virginia “Gin” and Uncle Jim in northern Indiana. Grandpa immediately started laying out a plot for next years garden!

While I was on day shift for my orientation period in paint shields my shift preference came through….no more second shift!!!

Back at the Barn House, Dad`s brother Willard “Bill” and wife Edna came for a visit. They were also making decisions on where to move. During the visit the discussion came up about the empty “Ravens Roost” and what the plans were

for it. Since they were looking for an interim place to stay and Mother and Dad didn’t know exactly when they would put the property up for sale, it was decided they would rent Willard and Edna the house for a year.

Dad and Willard did some roof repairs and other minor maintenance   on the house after the move.

Debbie had a very nice birthday party this year with kids from the neighborhood, school and square dancing. 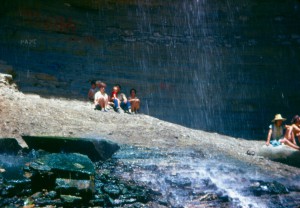 Finishing up our camping for the year included a trip to Clifty Falls State Park with great scenery and plenty of hiking.

We added an awning extension to the tent camper along with a food cabinet and folding Table this year.

Many of the Rambling Hoosiers camp and have camping trailers or motor homes. Usually a camping trip is combined with a square dance at the camp site. The local campground at Anderson was Lost Lake located east off of 38th street. Debbie caught her first blue gill there.

Greg`s 6th birthday with friends was mostly in the backyard play ground with dodge ball. baseball, tetherball and the swing set.

Halloween was a time for trick-or-treat in the neighborhood and Captain America with the Fairy Princess would get their share.

My day shift hours were from 6:45 to 3:15 and I soon realized I didn’t much care for the early morning hours, especially in the winter. I turned in a shift preference request for third shift, 10:45 to 7:15. This way I had the option of going to bed in the morning and getting up when the kids got home from school, or staying up for appointments, school activities or home projects.

Greg never did warm up to Santa much, but this year we were able to finally get a Santa Christmas Picture!

Thanksgiving seemed a little hollow this year without the big Barrett clan gathering. But, other changes were in the wintery wind and before we knew it, it was Christmas. Not just any Christmas; maybe the last Christmas in the Barn House!