Survived the Christmas holidays and still enjoying third shift. However, I was asked if I would like to go on salary again to work in the Process Design department. It would just be until the busy summer season of change over started in the shield shop tool room. The design department would be working six days a week and it would be on day shift. I’m not crazy about alarm clocks, in fact I hate the idea, but it would be good experience and a change of pace! OK!

More school pictures…Debbie is a 6th grader this year and Greg is in the 4th.

Mother’s birthday and she was excited about her present!

Square dancing with the Rambling Hoosiers group is still a fun filled respite from a hectic work schedule. Its great to have a family activity that we all enjoy.

Dancing with broomsticks or going barefoot and blindfolded trying to miss the wet sponges on the floor was always good fun.

An unusually warm spring weekend begins our camping season and our first outing was to Spring Mills State Park.

Spring Mill State Park is a 1,358-acre state park and is located to the south of Bloomington, about 3 miles east of the city of Mitchell on Indiana Highway 60. It contains a settler’s village, the Gus Grissom Memorial, a nature’s center, and campgrounds.

Gus Grissom, commander of AS-204 (Apollo 1), along with his fellow astronauts Ed White and Roger B. Chaffee, died on January 27, 1967, during a pre-launch test for the Apollo 1 mission at Cape Kennedy, Florida.

April is a busy Little League month, Gary and I are preparing for our first baseball team draft. Tryouts are held over several days where we evaluate and rank dozens of 8 to 10 year old players. Then we have two days to finalize our hopeful choices prior to the draft. After a blind draw for the team draft order, we choose players for our team.

While all of this is going on, the Franklin Little League officers are drawing up schedules. buying equipment, preparing

Carole volunteered to help out in the concession stand and as Gary and I started our first practice, the summer baseball frenzy had begun!
1975 MAY

Somehow during all this activity, we managed to have our first professional portrait taken. And we all look great!

Summer brings the busy season back to the tool room and me back to third shift…10:30pm to 7:00am. It`s also a good time to start-up the summer projects around the Wolffs Den. I had plenty of help painting the new T11 siding on the family room and garage.

The next phase involved adding cedar shake shingles to all of the gable peaks. 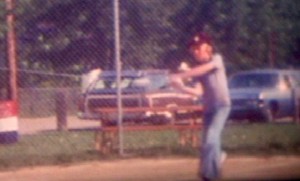 The Franklin Little League season is getting underway and we practice our team several days a week in preparation for our first game. One of our practice routines is to swing a baseball, that is attached to a long cord, into the strike zone of the batter.
1975 JUNE 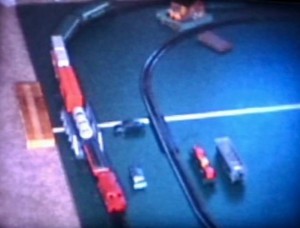 During the rainy days of summer, Greg and I play with and work on our scale model train layout. 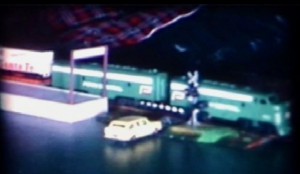 We transformed our 5ft x 9ft ping pong table into the layout bed for the train.

When its not raining, most of our spare time is spent at the ball park.  Carole works in the concession stand, where she started making and selling Spanish Hamburgers. All of the profits go toward equipment and upkeep for the league.

One way we save money is to reward a returned foul ball with a free bag of popcorn. The PA announcer always yells, “popcorn ball!!!!” whenever a foul ball goes out of play. 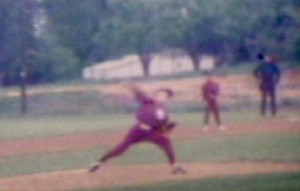 Greg enjoyed playing many different positions on the team and eventually accomplished playing at all nine positions during the season.

One weekend, we found time to make a trip to Kings Island. The wooden structure Racer roller coaster was one of the main attractions of the park. The Racer made its public debut at the park’s grand opening in 1972. It was thrust into the national spotlight after being featured in an episode of the popular TV sitcom The Brady Bunch in 1973 and is often recognized for playing a vital role in the roller coaster renaissance of the 1970s.

When we planned this trip, we had no idea that the Partridge Family TV show was going to be filming an episode for their final season showing.

The Partridge Family is an American musical sitcom starring Shirley Jones and featuring David Cassidy. Jones plays a widowed mother, and Cassidy plays the oldest of her five children who embark on a music career.

I had my 8mm movie camera with me for this trip and was able to catch the cast as they returned to their motor homes after filming a scene.

Debbie caught Shirley Jones eye from her motor home and got a wave from her. She was so excited

As I was filming, Dave Madden walked over to the crowd and noticed me filming and, being the ham that he was, stoped to ask about the camera and where we were from. Kind of cool.

We frequently provided varied activities for our baseball team and Debbie usually joined in. Putt-Putt golf was always a fun outing as were the post game trips to the Dairy Bar for ice cream treats.

A friend of Garys`, who helped with the team, drove stock cars at the Anderson Speedway and provided the team with passes to a race. What a night!

Baseball season has come to an end and Gary and I feel good with the outcome and what we were able to teach the kids. We finished second in the minors league and are planning to apply for a major league team next year.

We had three Gregs on the team, so we decided to create some nicknames. Greg Wolff became Fox, Greg Fisher became Fish and Greg Simpson became Juice (for O.J. Simpson prior to his troubles)

The team celebrated with a party at Gary’s in-laws pool. A great ending to an exciting and rewarding summer.

Now that our league baseball season is over, work is beginning on an addition to the cement block concession stand. A local contractor, with the help of us volunteers, started work on building a score booth on top of the concession stand. We helped with the framing, roofing, drywall and painting. Some team sponsors helped with flooring and wiring.

Just as this project was wrapping up we received some very sad news from Grandpa Barrett… Grandma had passed away. She had lived and worked for decades with a congestive heart problem but, after 78 years it caught up with her. She will be sorely missed. She was the bond that held the Barrett clan together, from Washington state to Ohio.

My two favorite pictures of Grandma Barrett show her love of flowers and animals. We all knew how deep her love of family went.

She was so proud of this wisteria that she and Grandpa started. It got so big Grandpa had to add 2×4 crutches under the branches to keep it upright!

This is what inspired me to start one of our own at our Wolffs Den.

This picture was taken with Mothers kid goats. The kids brought out the infectious laugh that  Grandma had.

Two days after we returned from Grandma’s funeral, we celebrated Esthers 58th birthday with a small family birthday party at our house. 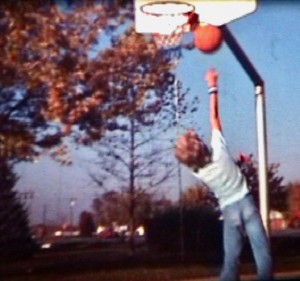 As Debbie was starting Junior High at South Side Middle School, and Greg was in the 5th grade at Franklin Elementary, the Fall weather brought on thoughts of basketball.

Our great neighbors, the Weatherfords, had a basketball goal installed between our adjoining drives and encouraged Greg to take advantage of it. 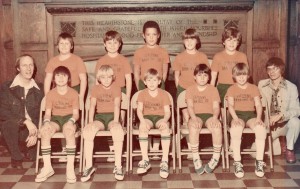 Gary Fisher and I decided to try coaching youth basketball at the Anderson YMCA this winter. We felt like it would be a good idea to have our sons coached by someone else for basketball since they had to deal with us all summer during baseball season.

Greg was picked by Leonard Gentry who also coached at Franklin Little League. It helped Greg in this new endeavor to have a familiar face around. The league was light hearted and fun, not as competitive as Little League. A nice change of pace.

October 3rd and we had kids galore for Greg’s birthday party.

My intuition concerning Mother and Dad getting restless at their house on Roberts Place proved correct! On the 30th of October they bought a two story house on the White River at east 75th street in Indianapolis. Packing up again and a garage sale were in the works.

Another fixer-upper to keep them busy. Lots of tree trimming, painting, caulking and general maintenance were needed. With Dad having to retire due to a nervous condition, this may prove to be great therapy. 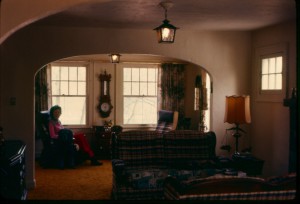 The inside had windows that needed re-glazed and the beautiful stained and varnished woodwork and trim needed attention. The old barometer from our Canada trip still followed them to the new house.

Another tradition of “following”, continued as well. Grandpa Barrett, as usual, was the first to visit the new project.

We all enjoyed a Thanksgiving visit with Grandma Wolff at her retirement community. She will be 91 years old next month and is still sharp as a tack with only a little arthritis problem in her hip.

After the visit we gathered at Mother and Dad’s River House for Thanksgiving dinner. Mother was showing Deb some family items from a blanket chest.

Later this month a heavy rain storm caused some flooding around the River House. Nothing close enough to cause any problems just pools in the drive and back yard.

Christmas on Scatterfield Road was the year of the bean bag chairs. They eventually could be found being used in every room of the house, …maybe not the bathroom! 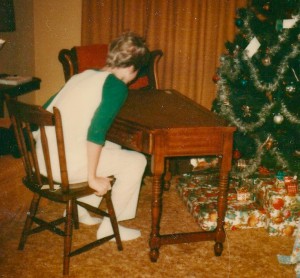 Greg got a new bedroom suite, complete with a study desk.

Moving on to Esther’s, for the Law’s Christmas gift exchange. We gave Esther a most wonderful, useful and practical power hand vacuum. (45 years later and it is still very useful!) 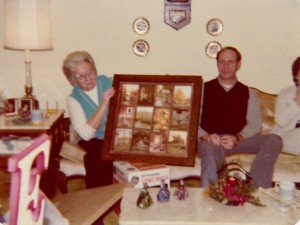 The kids got her a framed collection of various country scenes.

As work continued on the upgrades to the River House, an ice storm brought down several branches from the many large trees around the house. This created a lot of clean up and luckily only some minor damage to some gutters.

As this year comes to a close, we are looking forward to the coming year with Deb entering South Side Junior High, more Little League, camping, square dancing and our country’s Bicentennial celebration!