Moving into our own home was the beginning of many exciting life adventures to come! One of the first priorities was to get Debbie enrolled and registered for kindergarten at Franklin Elementary School, which was just down the road at 38th street. The next item of business was to get everyone settled into their rooms and start evaluating the work needed done on the house.

Painting was determined to be number one on our long list of upgrades and maintenance needed on the house that was built in 1952.

Dad loved to paint and was a ready volunteer! He started in the living room. The fiberglass and aluminum window awnings that were over the front porch and three picture windows would eventually be removed for better indoor lighting.

Even the kids helped out with the painting and clean up! Well, kind of.

Dad was not only helping us get settled but, still working adding on to the Barn House. He enclosed the carport and created a second den and then added a new attached carport. No more room for additions the west property line had been reached! 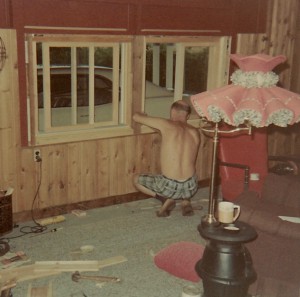 We weren’t the only ones moving this year. Carole`s Grandmother, Grace Pettigrew moved in with Esther. Grace was a VERY independent woman. Born in 1880, she grew up around farm work and when her husband passed

away in 1938, she remained in the rural Pendleton family home, living on her own. Much of that time was spent without indoor plumbing while heating with kerosene stoves.

to town with her daughter. One day a passing neighbor noticed her up on the roof! After stopping he discovered that this 85 year old lady was in the process of replacing some shingles which had blown off the night before. He was finally able to persuade her to climb down. Esther didn’t find out about this until she happened on the neighbor at the store and he relayed the story much to Esther’s surprise.

Grace was still driving her 1938 Pontiac to town for groceries and visits. On one such visit I asked how the car was doing. She said fine except the gas peddle would stick sometimes but she fixed it. I asked how she did that and she said she tied a rope to the peddle and laid the end of the rope up on the seat so when the peddle stuck she could give the rope a jerk and un-stick it. Going out to the car to check this out I was expecting to see a close line rope or a length of twine but instead there was an inch and a quarter diameter hay rope doing the job. It wasn’t long after this that she relented into moving.

Grace could be a little ornery. When Debbie was younger, Grace would tease her with the fly swatter until one day Carole had enough and grabbed the fly swatter and while shaking it in Grace`s face, told her this was going to stop…and it did. Grace was very proud of her independence and would insist on paying her five cents for ice cream when we went to Jimmies Dairy Bar.

Back at our house I was enjoying finally having a space in the utility room to organize some tools and getting some maintenance work started. One of the first things that I noticed after moving in, was out of the 5, three way light switches in the house, only one was wired correctly. How could someone live in a house for over 15 years and go back across a room to the switch used to turn a light off to be able to turn it back on? I finally managed to switch the wires onto their proper connection even though the normal practice of using a red wire was not used for the common lead.

Carole and I picked out some dark walnut paneling to install on the lower half of the entry way and dining room walls. Wallpaper on the upper half would follow a little later.

The “R” on the storm door from the previous owners would soon be removed.

We made new cornice boards for the draperies in the living room, dining room and family room picture windows.

Dad was putting a second coat of paint on our 5×10 plywood ping pong table which would fit on top of the pool table. We had many heated games on that table.

This summer also saw some new family moving into the Barn House menagerie. Mother added a new goat and her little kids. Debbie loved feeding the little kids and playing with them in the back field.

Dad built a shelter in the back field for the goat and her kids. The sheep also took advantage of the shade on hot days. But, when it was nap time Betsy would clear everyone out so her kids could rest. Greg helped keep things quiet.

On one sunny weekend we took a break from our work on the house and visited the Indianapolis Zoo. Debbie and Greg enjoyed seeing the different animals but, their favorite was the petting zoo attraction.

Grandma Wolff also found herself moving this summer. Uncle Willard and Aunt Edna bought a duplex in Westfield and Grandma moved into one side. Westfield in 1968, was just a small town surrounded by large areas of farmland. Grandma was 84 now and still living on her own but, arthritis was slowing her a bit and it was nice to have someone close.

A little Wolff history…the “Old Main” building on the Anderson College campus was taken down this summer of 1968. Grandpa Felix Wolff helped build this building after moving to Anderson from Moundsville, West Virginia with the Gospel Trumpet. Back then it was the first Trumpet Home.

Carole helped with the Pendleton Methodist Church Summer Bible School Camp, which was held atTurkey Run State Park. Debbie and Greg went with her while I stayed home and worked. As I remember it may have been a three day week end retreat.

Late this summer, Uncle Howard came by train from San Jose for a family visit and stopped by to see us and our new home. We had just moved the pool table into the family room from the garage this week. He really thought that was great!

August came and we celebrated Debbie`s 5th Birthday painting her bedroom with the color she picked out.

We were still working on other areas of the house trying to finish up before Christmas.

I was back in the tool room still working the second shift that I hated…not the work…just the hours!

September rolled around and Grandpa and Grandma Barrett were given a party to celebrate their 55th wedding anniversary. Still looking good!

With fall in the air, it was the time that they started canning and freezing fruits and vegetables from their huge garden.

October brought Greg`s 3rd birthday to our new home. He had already made a lot of new friends from the neighborhood behind us. We did find time to re-assemble the swing set in the back yard for the kids to play on.

November was Carole`s birthday and she was surprised with a birthday cake from Mother and Dad.

Thanksgivings were split between the Barretts and the Laws. This year we were at Grandpa and Grandma`s home for dinner. The aunts and uncles and cousins would all show up and the usual “kids table” was set up! I helped cut the turkey and ham for the kids.

Our first Christmas in our new home was a dream come true. We were up early and sharing the excitement of our family together on this morning seemed special.

We also had finished the addition of the walnut paneling and the textured wallpaper to the dining room walls just in time for Christmas.

We still had several Christmases to share this day.

Mother and Dad had a first Christmas too-in their second den! Their Christmas tree was traditionally set up in the living room by the stairway so, this was something special. 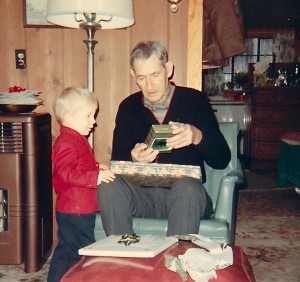 Grandpa and Grandma Barrett`s Christmas was next and I got some good photos with the kids.

We finished the great year of 1968, with the Laws Christmas and a visit to Grandma Wolff. Let’s see what the future on Scatterfield Road brings as we recall past events and happenings!