1952 NOVEMBER, HOME IN TIME FOR THANKSGIVING

We eagerly moved into the downstairs, which served as our luxury quarters, while we finished the extensive work required on the upstairs. The use of the word “we” is a misnomer in that I was usually playing or exploring the fields, woods and adjacent creek that flowed through the fields behind us. “We” included Doyle, a high school neighbor boy who lived across the highway. He had heard of the “crazy” family, over the hill,  that was living in a barn and he came to see for himself. Doyle thought it was an exciting idea and soon was like one of the family!

This was taken on the day we moved in! Mother and Dad look exhausted and they were! The horse stall sliding doors for the utility room show up good in this shot. Grandpa and Grandma Barrett came down to help us move in and took this picture with their new Polaroid Land Camera. The streaks in the photo are from the chemical that had to be wiped on the print after the 60 second development wait time. Not bad though after all these years!

Our first Thanksgiving dinner in The Wolff`s Den!

The first thing Mother wanted to do was have Thanksgiving dinner for the family in our new home. The place was packed but we had the best family get together that I could ever remember!

In the photo below, note the ceramic pig cookie jar sitting on top of the refrigerator. Besides surviving me growing up constantly sneaking cookies from the jar, this pig had another use assigned to it. I reasoned, since we were finally in the country, now would be a good time to get a pony. Mother always being the diplomat and lesson teacher, offered to donate five dollars to the pig toward the purchase of a pony. Wow! The lesson was, I could add my allowance and chore money too, until we reached my goal. Are you kidding??!!

This is a view from the kitchen door looking toward the bathroom door. The laundry area in the corner included the Ironrite Mangle Ironer. 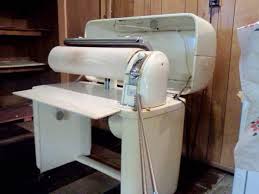 It’s an ironing machine consisting of of a big metal box with a huge roller in the middle that you move up and down with a knee pedals and hand controls. The actual name of it is the “Ironrite Mangle Ironer” — sounds like your clothes wouldn’t make it through, right? But actually, if you knew how to use it, you could get dry cleaner-perfect results. I well remember watching as Mother fed slacks, pillowcases, and shirt sleeves into the machine, and the resulting smell of steam and heated cotton.

This being pre-polyester blend wrinkle free, we ironed nearly everything. Now the “we” is me too! I got pretty speedy with flatwork.

Dad made Mother a vanity mirror and makeup area in the bathroom.

The bathroom fixtures were 50`s green but the early color film did not retain it`s color hues for very long. 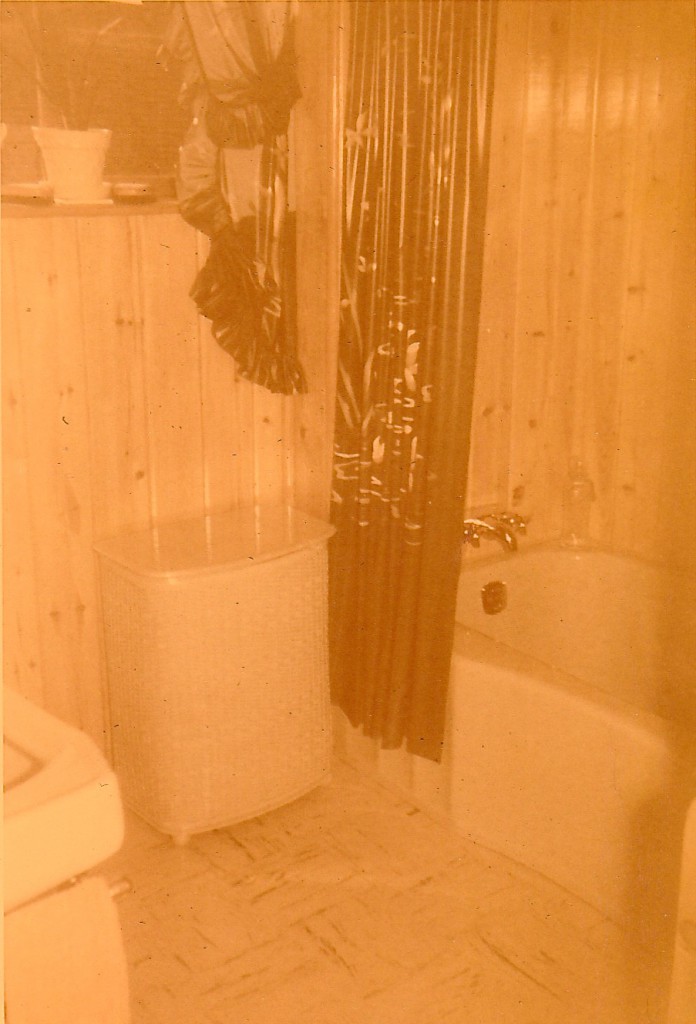 This is looking at the area where Dad removed the stairway and closed off the upstairs until later. This also served as our living/bed room area.

I can`t believe there were not more pictures taken ,of this epic moment in their lives, but looking at that first photo I think I understand!

Now that we were settled inside, Dad prepared for winter outside. A curving driveway path was laid out in the grass and many dump truck loads of road base stone were spread out along the markers. Doyle being around sure helped save Mother a lot of backache. We men graded, raked and tamped the new stone into place. I even got to drive the Kaiser around the drive to help pack it down!

Mentioning the Kaiser reminds me that Dad traded for a new 1952 Kaiser with automatic transmission and power steering which were new innovations in design.

When we first moved in, a telephone line was finally run to the house and being in no-mans-land, between Anderson and Pendleton, we were first issued 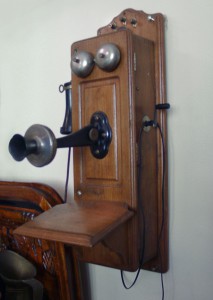 an old hand crank phone. Being on a six party line, our ring was four long rings. If we wanted to talk to someone on our party line, we just cranked the handle to correspond to their home ring: one full crank for a long ring and half a crank for a short ring. However, if we wanted an “outside line”, we had to click the receiver for the operator to place the call. This usually followed a short conversation with the local operator concerning everybody`s wellbeing and any news that should be passed on.

Whenever we left the house to run an errand or go for a visit it always included a side trip through the country. We were either  looking for saplings to transplant or large rocks or field stones to gather  for the landscaping.

Farmers used to pile the stones they turned out while plowing in the corners of the fields. I can`t remember going anywhere without stopping by a field and loading the trunk of the car with field stones which we used to line the flower beds and driveway. Dad even took time to build an outdoor fireplace and grill out of field stones. 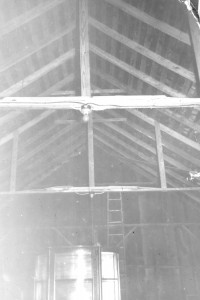 Work continued upstairs during the winter. Insulation was added to the walls and what would become the open beam ceiling. The redwood flooring was power sanded and interior framing with gypsum board (dry wall) was put up forming the bedroom and upstairs loft bedroom. Windows and an entry door were added.

Christmas was pretty calm this year. Except, now that we were out in the country, I was able to have my first BB gun! A Daisy pump action was different from what the other kids wanted, but it resembled my Grandpa Barrett`s pump action 22 caliber rifle and I was thrilled!

As winter was winding down, Mother and Dad were putting the finishing touches on the downstairs. This included a breakfast nook built into the corner behind the brick planter. The new crank out windows offered a nice view onto the porch and patio garden area. 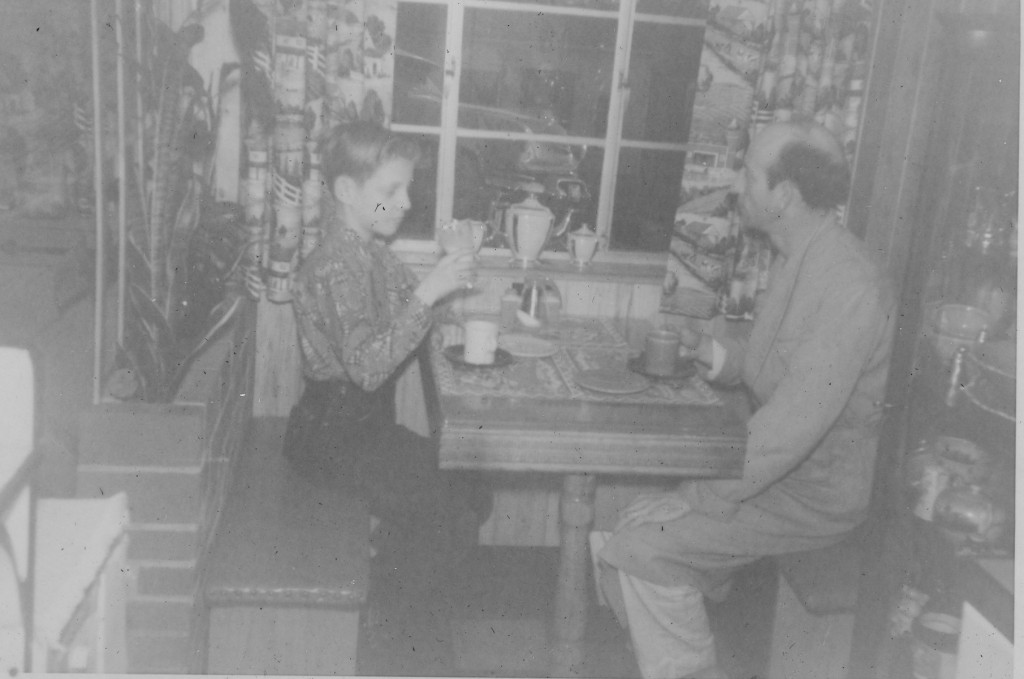 The stairway was rebuilt with a landing and going the opposite direction from the original to save floor space. Doyle provided the necessary helping hands. 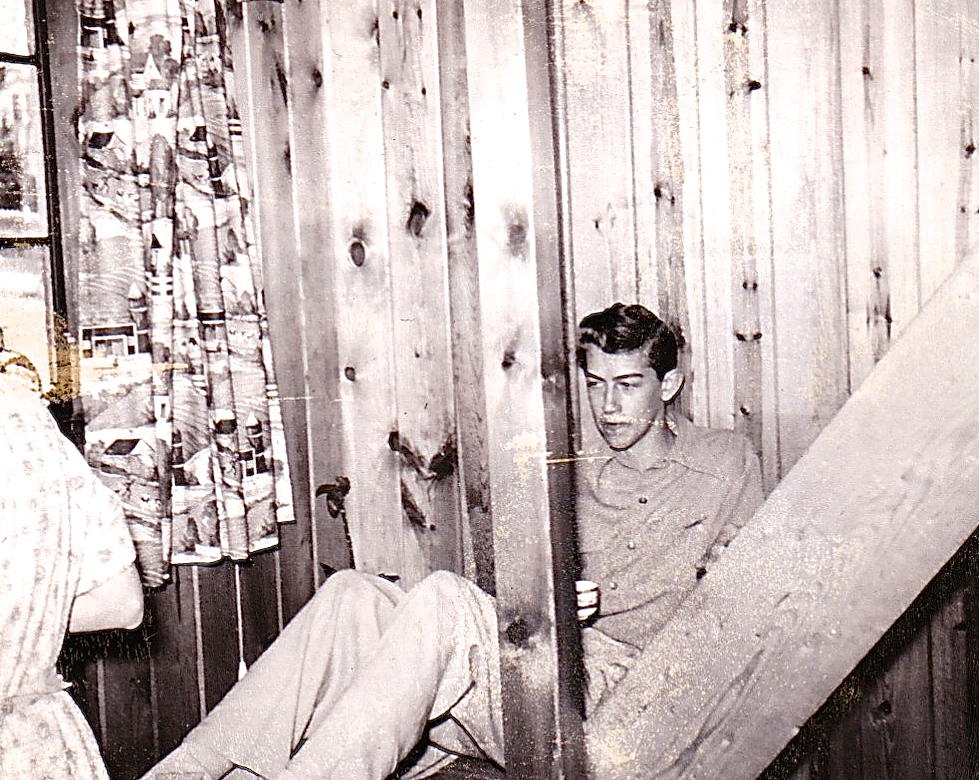 As the barn house downstairs was finished, and spring was around the corner,, we prepared and planned for the long awaited warm weather and the outside activities that followed!