Closing out the fruitful year, we celebrated Thanksgiving Day with Grandpa and Grandma Wolff and family on High Street. After we came home Mother painted another waterproofing coat of paint on the Den fish pond. Dad finished the steps from the Den up to the hallway leading into the upstairs. I finished stapeling the remaining insulation on the Den walls.

As we were finishing Aunt Mae and Uncle Fred showed up for a visit. The next day Mabel and Bob stopped by for coffee and a chat at our round oak dining table.

Mother and Cookie got a chance to rest in the old Morris Recliner in the Den. The brick steps leading to the upstairs that Dad just finished are in the background to the left.

Even in November if the weather permitted, we hauled limestone gravel to top off the drive. 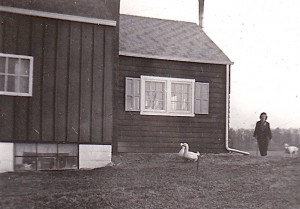 Mother was kept busy chasing the ducks away from the ground level windows. They had a taste for the glazing putty holding the windows in the frames.

Grandpa and Grandma Wolff were out for a Christmas visit and opened presents in the Den.

The “Big TV” with the useful knobs and behind it is the deer feet lamp that Elmer had made after one of his hunting trips.

I took this Christmas dinner picture of Doyle, Dad, Mother, Grandpa and Grandma Barrett. Note the post to the right isn`t finished yet. Mother and Dad still look exhausted. I can`t imagine why!

Dad, Doyle and I went to Anderson to visit Grandpa Wolff who hadn`t been feeling well lately. On the way back home we were involved in a five car pileup on highway 67 just before we got to our driveway. One of the cars that had already been hit, crossed the centerline and headed straight toward us. We were all in the front seat of the 1940 Buick and I remember Dad putting his arm out in front of me as he turned the wheel and headed toward the ditch. This kept us from being  hit head-on but the left rear wheel area was impacted and straightened us out as we went into the ditch. We checked ourselves and decided we were fine and lucky. Dad sent Doyle to tell Mother that all was well and we would be a little late. Doyle was so pumped with adrenalin that he ran the whole way to the Barn House, tripping and stumbling all the way. When he found Mother all he could say was, “Wreck……..all ok……….be late!”, as he regained his breath.

Shortly after that, Dad bought a new 1954, Oldsmobile, two-tone blue and grey coupe. It was the new model with the V-8 engine called the rocket 88.

Early spring and Dad took time to construct a basketball goal on the cow barn for us. We had some rough one on one and HORSE games out there.

Uncle Jim was a high school basketball fan from the northern Indiana region. The state finals were always held in Indianapolis and televised on a local TV station. The TV signal, then not traveling much more than 50 miles, was not received at his house. So each year at tournament time they would come down to watch the broadcasts with us. Dad`s new Oldsmobile is parked behind Uncle Jim`s wagon and the Quonset is in the background.

This year would be special since little underdog Milan would be in the state tournament for the second time. Sandwiches, chips and popcorn were ready and the living room was packed.

The Indianapolis Star reported on the finals;

“Of all the legends of Indiana high school basketball, one of the most enduring is the story of the 1954 state championship game in which tiny Milan High School won on a last-second shot by Bobby Plump.

The story was further mythologized by the 1986 movie “Hoosiers” in which fictional Hickory High School prevails against all odds. But the real-life Milan team was more experienced than their wide-eyed movie counterparts. Milan had gone to the state championship the year before.

The story of the Milan championship is also inevitably linked with the issue of classbasketball. Milan was the smallest school to play in the Final Four two years in a row since tiny Wingate in 1913 and 1914. Milan beat powerhouse Muncie Central 32 – 30. Tied at 30 in the last seconds of the game, Bobby Plump hit a 14-footer as time expired to get the win and in the process, denied Muncie a fifth state title.”

March found us finishing some projects and starting others. The living room windows were finished and a new carport project was started.

I thought we were finished with the cement mixer, but around here I learned that we were never finished with anything! Along with a cement floor for the carport, They started a sunporch addition off the den.

The sunporch was on the back side of the Barn House just through the double French doors in the den. The chicken house and Seybert`s field are in the background.

Grandpa and Grandma Barrett came down again with more plants and trees for spring planting. Portulaca was planted around the water trough fish pond. A window box flower planter was added to the Cow Barn shed along with a coat of trim paint to help spruce the old building up. Spring had sprung!

My Grandpa Felix Wolff passed away today at the age of 75, following a two week illness at Saint John`s Hospital in Anderson. This hit me especially hard. Not only was this my Grandpa, but it was the first time in my life that I had to process the grief of losing someone dear to me.

The Wolffs were very reserved emotionally, seldom outwardly showing or expressing their emotions, but carrying deep within them the devotion and love of family.

One of my fondest memories of Grandpa was when I was very young and he lifted me up on his lap. I had been moping around because it was raining and I couldn`t go outside. He was going to fix it and make it better! He took out one of his bookbinding spools of heavy thread and measured out a yard of cord by holding the spool to his nose and extending his hand, with the pinched cord, straight out to his side. Then he cut the cord at the desired length with his pocket knife. Grandma`s button tin was on the end table and he asked me to pick out a big button. After a careful search, I found a big oval shaped button that Grandpa said was just right! He had me put the two cord ends through two of the button holes and then he tied the ends together. Holding my hands with the cord looped around my thumbs, he positioned the button in the center of the loop. Now we twirled the button and the cord till it wound itself up and then as we pulled on the ends of the loped cord, the button started spinning and buzzing as it unwound and rewound itself in the opposite direction. When the button stopped, another pull would start the process in the other direction, creating a perpetual buzzing noise.  Grandpa called it a button buzzer and he saved the day!

Grandpa joined the Gospel Trumpet Company in Moundsville, West Virginia on July 11, 1901, at 23 years old. Here he is operating  a paper shear.

Grandpa was working on religious mottos which became one of the mainstays of the Trumpet Family.

The Gospel Trumpet was planning a move to Anderson, Indiana and Grandpa made several early trips to help settle the site. His journal details one such trip.

March 21, 1906, left home with my brother for Huntsville. Had pictures taken $2.50 for six. Stayed overnight in Huntsville.

25th  Attended my first meeting in Anderson – on the third floor of office building. Frank Shaw made a talk. Bro. Tasher preached. In the afternoon Bro. Shaw took me over the city in a buggy – and took my trunk to the depot. Clay Weiss, Melvin Bamford and I took a walk out in the city after supper.

24th  Evening went to fire department to see them “hook up” when the alarm was given.

This attention to detail was a hallmark of the Wolff family and is still evident in the generations that followed. I don`t know if it`s a blessing or a curse but we live with it!

In 1949 The Indianapolis Star newspaper did an article about Grandpa being the “Bible Doctor”.

Grandpa`s life was devoted to his family, The Church of God and The Gospel Trumpet and his work with bookbinding. Following his retirement in 1945 he never took time to write any more in his journal. When we would arrive for a visit he would always be running up the basement stairs from his shop to great us.

This hot stamping machine was one of the machines Grandpa designed and built to emboss gold leaf and colored foils into leather book covers and mottos. He also built a whole house water softener system of his own design.

Grandpa loved The Popular Mechanics Magazine and saved many of the early issues from the 1920`s. After he retired, he leather bound those issues into several large volumes of books. We are lucky to still have a few of these to enjoy today and remind us of our first Pack Leader!

I think Grandpa Wolff`s passing started Mother and Dad thinking more about our heritage and the Wolff namesake. They evolved the idea of The Wolff`s Den as sort of a “brand” for the family. Dad did some sketching at work and Mother drew up some ideas at home for a sign to hang at the entrance of the driveway. Dad cut out the sign on the Shop Smith and Mother painted their collective Wolff idea.

The Wolff`s Den Was christened!!