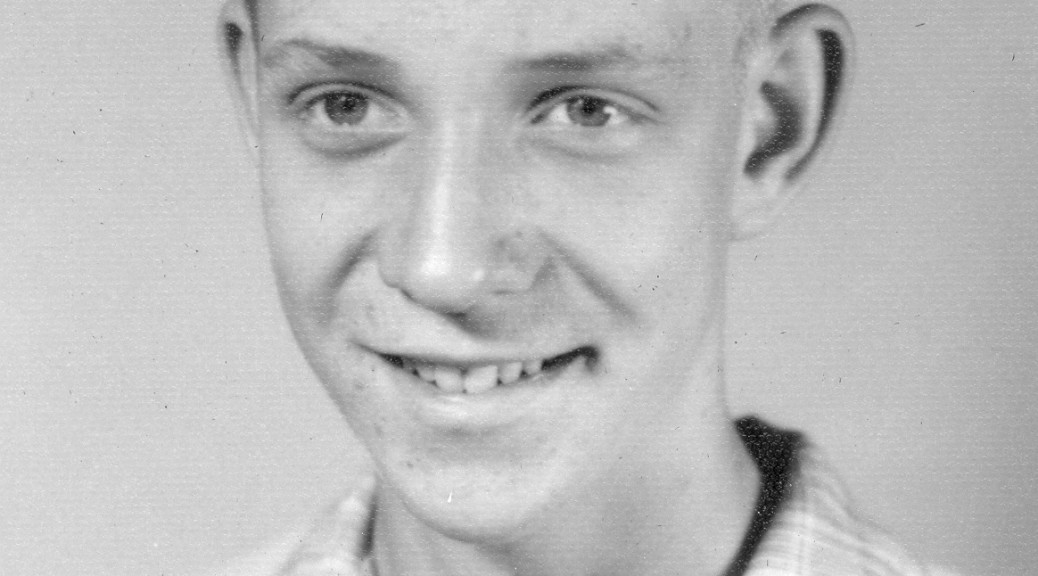 I looked forward to starting high school with its` new routine and opportunities even though I would be a lowly freshman. The kids were the same ones I had come to know over the last 4 years and that was unique, given my past grammar school roaming.

I joined the camera club and a dog obedience class that was taught by the camera club sponsor. The class was on the weekends behind the school, weather permitting, or in the old gym. Tippy and I never missed.

With school started, Rusty gone and our daily lives settling into our regular routines, Dad continued his habit of tweaking and upgrading the Barn House and landscaping.

It`s interesting how looking back at these old photos brings so many stories to mind. This one reminds me of at least three stories.

The foreground and dominant theme is of Dad and his constantly finding aesthetic improvements that were really not necessities, but they always added to the uniqueness and beauty of the Wolff`s Den! This one was a fence around the carport`s flat roof.

The second story, in the mid-field range, shows Grandpa`s 1949 Nash that he kept for a second car. He let me drive it around the circle drive, up and down the hill. That was how I learned to drive a straight shift, three speed on the column automobile! I would intentionally stop on the hill in front of the old Quonset, and on the gravel drive, try to start up the hill without rolling backward or spinning gravel under the tires. Foot off the brake, foot on the gas, let out the clutch…crap! Start over again.

The third story, and the furthest from view, centered around our neighborhood baseball games and the new neighbor from hell. Soon after he moved in, we hit a baseball that just rolled through the front fence and into his yard. As we had many times before, when Leona lived there, one of us went to retrieve the ball. But, this time, the new neighbor comes running out his back door and scoops up the ball and refuses to give it back. After repeated requests to return the ball, he tells us we just need to quit playing ball by his yard!

Now I know we are getting older and stronger, but try as we might, none of us can hit the ball more than a couple feet past the fence, even on a good day. The gauntlet was dropped and stubbornness prevailed! We didn`t go running to our parents. No, we would handle this ourselves.

We pooled our resources and bought extra baseballs. We didn`t need many because seldom could we get one into his yard and he usually wasn`t home. But, when he was, he would run out, get the ball and mark where it landed with a stake or rock. We later found out that this was his”proof” for his lawyer as to how dangerous these baseballs were.

The irony of the dangerous baseballs was, that when he would mow his yard, he would hit the “forgotten” baseball markers and send them flying! Fun and games. We had fun with his house when Halloween came next month!

The Quonset was once again clean and reverted back to a workshop. Dad had bought his first power tool and it was a dandy; a Shopsmith wood working station! Dad purchased the optional jig saw attachment which he used to cut out the Wolff`s Den signs. One of them is visible in the background.

The Shopsmith Mark V (Model 500); Magna America put this American classic 5-in-1 tool into production in 1953.

Shopsmith tools were made in San Francisco by Magna Engineering Corp. from 1947 to the late 1950s. Yuba Power Products, Inc. of Cleveland bought Magna Engineering, but soon sold the Shopsmith line to some employees, who used the name Magna American Corp. They also eventually failed to make a go of it, and the Shopsmith manufacture ceased in 1966.

Shopsmith, Inc., was formed in 1972 to resume manufacturing using all the original equipment. This new company began operations in Troy, but moved to Dayton in the late 1970s.

The Shopsmith was a versatile woodworking machine with a variable speed motor which turned an arbor on one end and on the other a power take off for running the jig saw and other optional tools. The arbor could accommodate a drill chuck, 12 inch saw blade, 12inch sanding disc, drum sander and a faceplate for driving the wood lathe. The rails with the motor could be raised vertically and locked in place to accommodate vertical drilling or drum sanding with the saw table rotated 90 degrees.I was hooked and started my wood working hobby with this machine.

Mother had been thinking about going back to work and was checking out various secretarial openings in the area. Dad was looking at the new cars that just came out this fall. He decided on a new 1957, Nash Rambler station wagon, since Mother liked the used one she had. Bright red this time with artificial wood trim!

With Thanksgiving just around the corner, the baking and dinner preparations began. Note our “new” phone and the wraped  lower sections of the support posts are finished.

Mother had soooo much free time during the winter, she decided to try her hand at water color painting. Of course we don`t start small and she selected a scene of the fields out back for her first endeavor.

The painting may have to wait for awhile, Mother took an office manager job in Muncie with an environmental testing equipment company, Trop-Arctic.

Spring sprang early this year and Tippy was feeling his oats as the weather began to warm up. Tippy loved to run and his herding and territorial instincts rapidly developed over the winter.

As part of his obedience training, I would walk him, with his leash and choke chain collar, around the five acre boundaries. He was to “heel”, that is to walk at my heel and not try to lead, as we made our rounds. He was the smartest dog I had ever had or been around.

Sadly this spring, my dog obedience teacher from school passed away. She was so active with everything she was involved with and her passing was a total surprise.

In the short time we had together, she taught me the importance of discipline and patience, not only when working with dog obedience, but also in photography.

Continuing our training, Tippy quickly learned not to go through a gate unless called or invited. I could walk all the way to the back field and he would still be laying by the gate waiting for the “come” command. With that one word, he would be sitting by my side within seconds.

By the middle of summer, we were finishing up hand signals for heel, stay, come, stop, sit and lay down.

I had a growth spurt over the winter and as I turned 15 this July, I was 6 feet tall.

Mother`s flower beds kept her busy and at times Dad had to call her to come in at dark! She loved the dirt and growing new species. She and Grandma Barrett joined the Pendleton Flower Club and would take turns hosting the meetings.

Grandma kept busy in her flower beds when not in the vegetable garden helping Grandpa. She continued to do this with high blood pressure and diagnosed congestive heart problems!

Grandpa loved gardening and once said, if he had a good mule and 10 acres he could feed the whole town! He was at it from dawn to dusk, enjoying every minute.

The harvest was great! September was approaching and the sophomore year was awaiting, but some cousins came down to visit Grandpa and Grandma before school started.

Barbara and I made early Christmas cookies for the family dinner. We had a small early family Christmas for some members who were going to be away for the holidays.

Always something unusual going on at The Wolff`s Den!