Continuing my studies at IUPUI, and made the Dean`s List this past year. My Purdue on campus classes and my apprenticeship classes transferred to my class credits, so I am considered a mid-term junior.

The family is still enjoying square dancing, and we travel several times a month, with our Rambling Hoosiers club, to several other clubs in the area. Debbie and Greg enjoy meeting the other kids at the dances and the pitch-in refreshments that are always on hand. 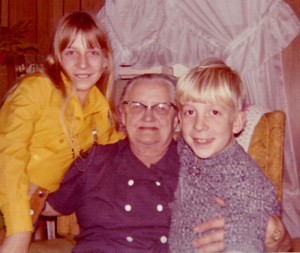 During a break in the weather, we made a trip up north to Lowel, Indiana to visit Grandpa and Grandma Barrett. They had both settled nicely into their new house and surroundings. 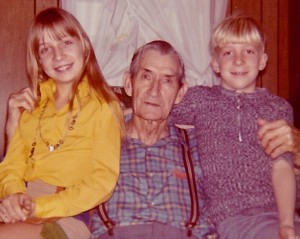 Most of their family lived in the nearby area, and paid them frequent visits. Two daughters and a son along with the grandkids keep a close eye on them.

Third shift at work is great. I can flex my sleep to adjust to any day or night activities in which we are involved. This is coming in handy, because last year I was appointed T-Ball director for the Franklin Little League, and with organizational meetings and tryout planning I need to be available mornings and afternoons.

Once again we have school pictures.

Greg was getting better about having his picture taken. He almost smiled this year! 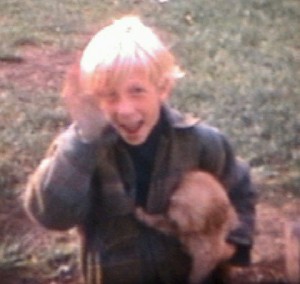 A fellow worker raised miniature poodles, and had a new litter of pups ready for sale. Having lost Cappy, the kids wanted another dog, so we checked out the poodles. An apricot colored one caught our eye, and we named him Brandy.

T-Ball tryouts were held in April, and Greg was drafted by a different coach this year. We bought a regulation Tee-Ball batting post, and also practiced hitting a pitched ball this year.

Debbie was still taking gymnastics and started working on baton twirling this year. 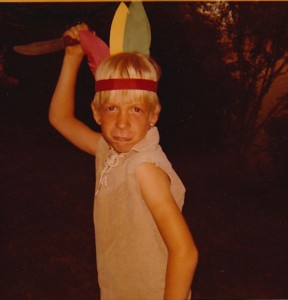 Greg had joined a WMCA boys youth group, that had activities based off of the Native Indian culture…but not necessarily this action!

Carole and I began looking at camper trailers…big camper trailers with solid sides and a roof! We found a new 32 foot fully self contained one at Modern Trailer Sales in Anderson. They installed a wiring harness for the driving lights and a Reese trailer hitch on our 1966 Chevy station wagon. With some temporary license plates we were on our way.

This April, Mother and Dad sold the Barn House, and bought another fixer-upper on Huntsville Road near Pendleton. It set high on a hill off the Huntsville Road curve heading to Anderson. 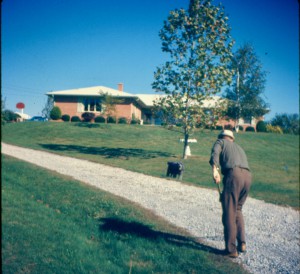 Dad still had to tend to a long gravel drive again. This house was a long rambling ranch style, so everything was on one level for a change. 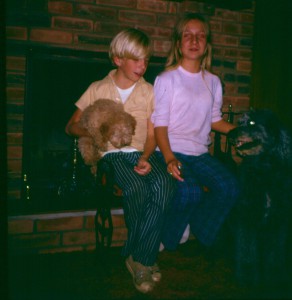 The kids, Brandy and Higgins liked the new house!

Warm weather brought out a variety of summer activities, including sidewalk roller skating. 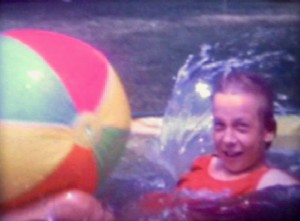 The weather was perfect for our traditional Memorial Day pool opening! 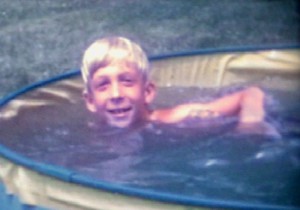 Greg got off of his bike long enough to cool off in the pool.

As school was out for the summer, and in between T-Ball games, we were able to enjoy an outing to Kings Island amusement park.

Of course I had to join in the fun. And, Carole even braved the cable car ride high above the park. She and Debbie were in the gondola ahead of Greg and I. And, as I was taking pictures with the 8mm movie camera, most of what I filmed was of Carole yelling at me to make Greg quit leaning out over the side! We had a great day.

Grandpa and Grandma Barrett drove down to visit and see Mother and Dad`s new house. This was pretty much a tradition with them. I always remember them driving to visit us within the first week of our moves…including the Houston, Texas move.  Grandpa was 83 years old now, and had a hip replacement last year! I hope I got some of his genes!

We took our longest trip with the new camper on July 4th. We caravanned with friends to Madison, Indiana for the Madison Boat Races on the Ohio river.

While caravanning, we all had citizen band radios, (CBees) to keep in touch with each other about traffic and upcoming hills or curves…of which there were many in southern Indiana.

Back home in Anderson, the Franklin Little League T-Ball tournament was under way. Greg and his team won their first game, and went on to win the league championship. Greg was selected for the all star team, and they competed in the city tournament, winning a couple of games, but ended up loosing to the eventual city champ. 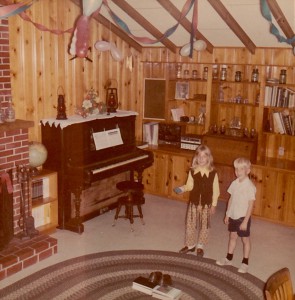 Summer turned to fall, and we decorated the family room in preparation for Debbie’s 10th birthday party.

This fall, our friends from square dancing, Bill and Sally, invited the campers to their apple orchard in Knightstown for a camp out. They set up their old cider press, and we all picked apples and the kids cranked the press. We enjoyed the best tasting apple cider ever!

As was our camping tradition on the final day, we all pitched in our remaining food for a slow cooked kettle full of hobo stew!

Winter is on its way, and our final camping/square dancing trip of the year took us to Spring Mill State Park, where we celebrated Greg’s 8th birthday. This makes the fourth state park we have camped in this summer. 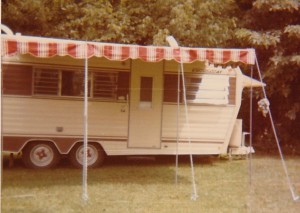 We did add an improvement to our camping experiences this fall. The nice long patio awning was greatly appreciated when shade trees were not available.

We had Thanksgiving dinner at Mother and Dad’s new Huntsville House this year. The weather made it a chore to get up the long snow covered drive, but we made it. 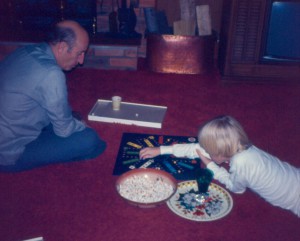 Dad and greg took time to enjoy a board game after dinner. 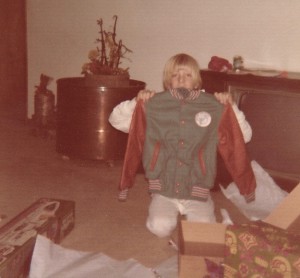 Greg was a huge Miami Dolphins football fan, and his wish came true this Christmas when he got his Dolphins jacket.

In preparation for our Christmas visit, Dad was busy plowing the driveway from another snow.

We arrived safely, and the kids enjoyed the fireplace before getting their Christmas stockings.

The old kitchen clock from Felix and May Wolff`s house on High Street, still held the prominent spot on the mantle. 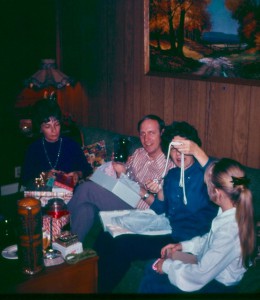 Carole, me, Mother and Debbie enjoyed a gift opening by Mother. 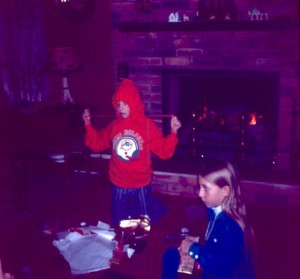 Then, being all bundled up, they had to take advantage of the giant snow covered hill out front.

I recognized some grumbling mutterings from Dad, about the snow and that driveway. That often indicates a need to find other pastures better suited for the times…we’ll see!