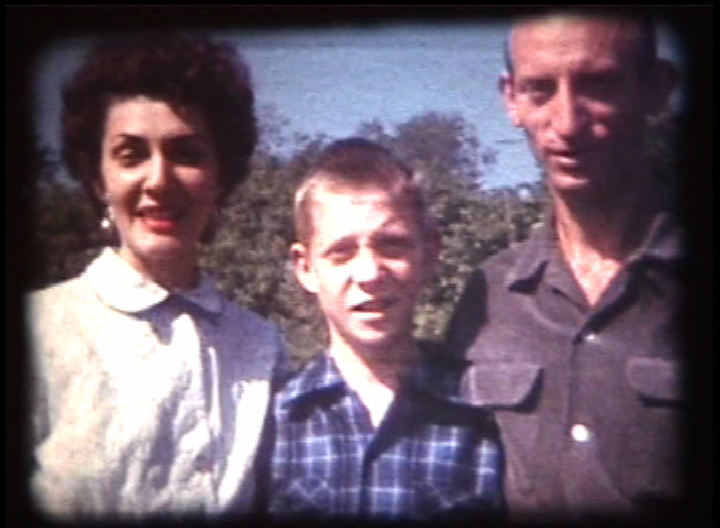 Big, big doings at The Wolff`s Den this summer! School is out and Doyle graduated this year and heading to the marines.. The gang is starting our summer adventures. Mother and Dad are progressing with the remodel and landscaping. Grandpa and Grandma Barrett are planning a big garden just south of the chicken house.

Dad`s first project was to dig a hole for the post that was to hold the Wolff`s Den sign at the gated entrance to our long drive.

The start of Mother`s long flowerbed runs along the left of the drive. The drive crested the hill and then went down and curved in front of the house and back up the other side then across the top of the hill. This was my daily walk to and from the school bus each school day. As you can see, it was up hill both ways with 3 ft. of snow in the winter and heavy wind and rain in the spring, but it built character…. and a character!

In Indiana, the spring weather spauns many tornadoes and since Mother was in a terrible one as a child in Oklahoma, she was deathly afraid of storms. Whenever a storm would pop up, it was the drill for everyone to head for the basement. A storm at night and a pallet was made for me to sleep on top of the chest type freezer in the basement. I remember begging, “Just let it blow me away so I can be in my bed!”.

Spring was also kite flying time and this year we added a new twist. We four boys each asked for bow and arrow sets for Christmas, not the toy sets but the longbow target shooting sets and we got them! They were so stiff we could just barely bend them enough to loop the cord over the bow.

After we finally figured out how to shoot the arrow without the cord leaving a burn mark on our wrists, we were ready for some serious targets. The most obvious and challenging targets were of course our kites. This was great for awhile, but retrieving the arrows from clear across the field soon became tedious. Some other target had to be found that didn`t require all this retrieval.

A few days later, we devised a game that solved the problem. The “brilliant idea” was to get in a circle and one of us would shoot an arrow straight up in the air. The object then was to maneuver yourself to be the closest to the arrow as it hit the ground. We got points based on our distance from the arrow and the bonus was we didn`t have to chase after the arrows, wow how awesome! It was funny to watch someone just take off running because they had lost sight of the arrow and wanted to get out of the target area. Luckily we all survived the summer and our parents never learned of the game till years later!

Dad finished the masonry stone work on the outdoor fireplace grill and Mother painted the Quonset barn red. The work on the sunporch and carport continued.

As the sunporch and carport were being finished, Dad always wanting to be one step ahead of today, started on the front entry way and porch.

Some of the receipts for building materials, back then, shows how prices have really changed over time.

We extended the drive to the carport as it was finished. Mother is on the new front porch and the used, tan, 1954, Nash Rambler station wagon is parked in the carport.

Summertime was also swimming time at Pendleton Falls Park. Well, more like frolicking and splashing, as I couldn`t swim. Mother and Mike and Jeff`s mom would bring picnic lunches and sit under the shady trees on the hill while we boys played in the swimming pool below.

On one of these days, I was following the shorter boys across the swimming area that was roped off from the deeper falls area for safety. We were heading to the concession stand and walking along the rope buoys as this was the shortest distance.

Suddenly my foot went in a hole and I fell over under the rope. I tried to regain my footing but the sloped gravel bottom just slid me toward the deep falls area. I frantically tried to reach the surface for a breath of air, but could never quite make it. After some time, my life didn`t flash before my eyes as they say, I was just so exhausted that it felt like a welcome relief that the struggle was over. I just relaxed into a peaceful state of resignation when I felt an arm around me. After some coughing and hacking I was fine. The boys went running to Mother to tell her I was O.K. and when I got there the hugs and kisses turned into lectures and threats of not returning to the pool.

I promised to stay well away from the buoy markers and to take swimming lessons at the YMCA and Mother relented. On completion of my swimming classes, I still could not swim! A second course proved just as futile. We kids continued our trips to the pool, but with more respect for the water.

The sunporch was finished and Grandpa and Grandma`s garden was starting to produce. Grandpa would load his trailer with the garden produce and set up a roadside sale in the area across highway 67, where highway 9 junctions. Shortly after he started his enterprise, he would have customers waiting for him to come and set up and he would be sold out in a short time!

This summer, to earn some money, I went home to Chicago Heights with Grandpa and Grandma to work with Grandpa in his machine shop. I stayed a week or two and learned how to safely operate several metal working machines and have my first exposure to what a machinist did.

Besides the new work, I enjoyed the TV programing available in the Chicago area. The network market was much larger in Chicago and I was able to watch many more of my favorite hero shows.

I earned enough money to buy the 22, rifle I had been wanting since Christmas. The purchase was conditional on my completing a firearms safety course at the Indiana State Police Post in Pendleton. All of the gang took and passed the course and we were anxious to purchase our guns.

While waiting for our rifles we planned our target range in the back field. We started saving the wax cardboard milk containers to fill with water for a splashing target and tin cans for jumping targets.

Another pastime was our version of Mumbley Peg. The game gets its name from a stick driven into the ground by the winner of the game, which the loser must pull out of the ground with his teeth. There are different variations of Mumbley Peg. One version involves two opponents who stand opposite from one another, feet shoulder-width apart. The first player takes his pocket knife and throws it at the ground, so that it sticks into the ground as close as possible to his own foot. The second player take his knife and does the same. The player who sticks his knife closest to his own foot wins. A player could automatically win if he purposely stuck his knife into his own foot.

Our version was more interesting and took more skill and time to complete a round. We faced each other, but we had to take the point of the blade between the first and second fingers of the right hand, and flip it with a jerk so that the knife turns once around in the air and strikes the point into the ground next to the OTHER PERSON`S foot! Then, if the knife stuck in the ground, that person had to spread his foot out to the edge of the knife and if the knife didn`t stick a turn was lost. The person to get their opponent to spread out and lose their balance and fall over would win the round. This was an outdoor game that developed strategy, dexterity and comradeship. Somewhat different from todays electronic thumb manipulated games.

The family would take the short trip to Geist Reservoir occasionally to do some fishing and relax and recharge our batteries. This was before any streets or houses were developed. This site is where the current north end of Carroll Road meets the bridge.  Big houses there now! 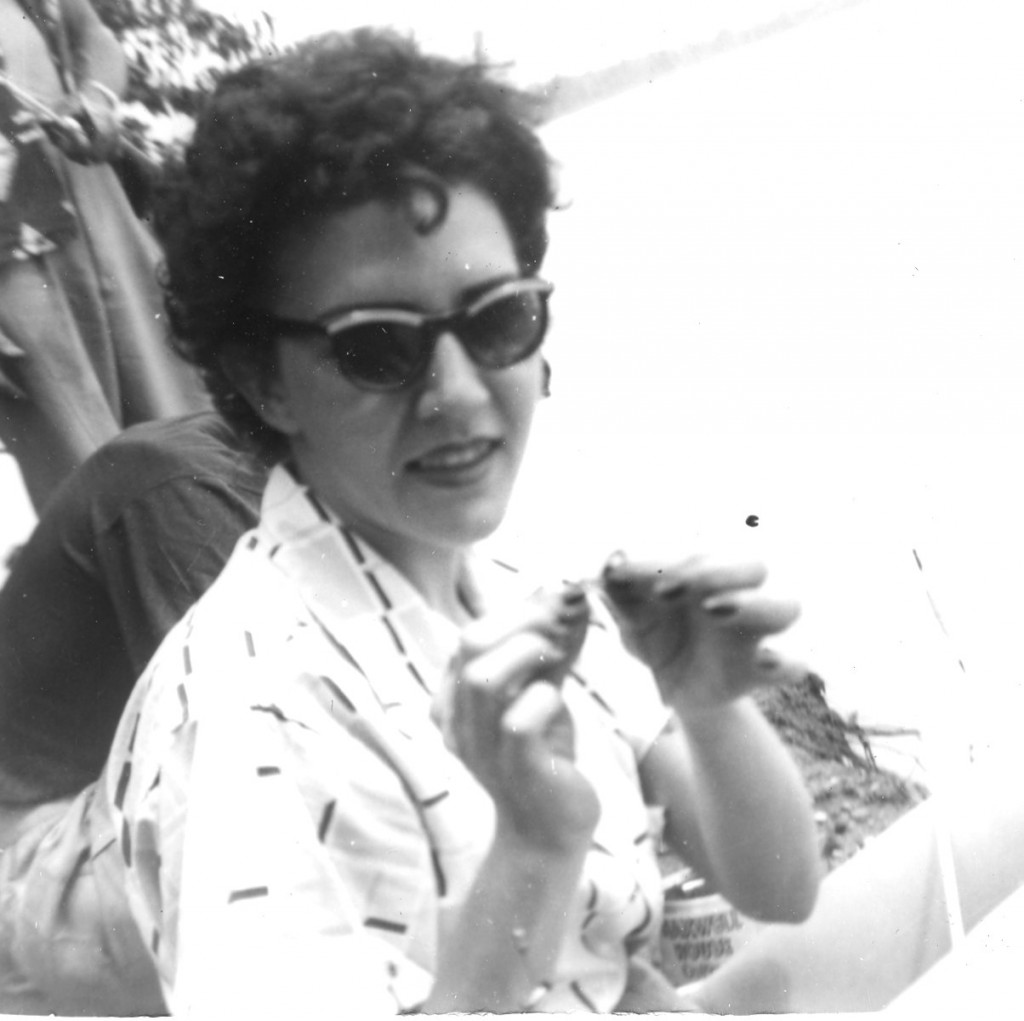 Mother didn`t mind baiting hooks but we had to clean the fish for her to fry!

Summer winding down and we boys have gotten to be pretty good marksmen. Now we were off to the neighboring fields and small creek that provided more challenges. The creek that eventually found its` way into Falls Creek and on to the Falls Park pool, was our favorite shooting gallery. The floating twigs, leaves and occasional water snake provided great moving targets.

Surprisingly, given our past record of devising FUN activities, we never had a close call or unsafe act. Well, except for the time we were trying to shoot crows as they flew overhead. Not having any luck with our 22s, I borrowed Grandpa Barrett`s 410 shotgun to give us a better pattern of fire. One crisp fall morning, we hid in the corn field and waited for the crows to circle overhead. Great plan! Here they came: straight overhead and we blasted away. Didn`t hit a thing. But, shortly we could hear the 410 pellets falling back to earth, striking the dried corn stalks all around us. Lesson learned; don`t shoot straight up!

School starting and I will be in Junior High 7th grade. We get to move upstairs and have our own locker and change classes at the bell! Wow, big time.

I met a nice girl at school this year. We shared several classes together and I let her copy from my test paper. We traded class photos and I thought she was cute. Her name was Carole Laws.

Some of the wild cats stuck around to join our menagerie and a couple eventually became semi-house-cats.

We had our worst winter yet at the Barn House this year. Mother and Dad used the grader blade on the David Bradley tractor to clear a path down the drive. This is Mother taking her turn!

It was deep! I kept busy feeding and watering the animals that congregated in the Cow Barn as if it were a Noah`s Ark!

Christmas was soon upon us and my wish for an English type bicycle was granted. It was prominently displayed beside our giant Christmas tree.

Our dog, Prince, was even excited! A great two plus years at The Wolff`s Den!