Spring has sprung and that means our annual Easter best is showcased as we return from Easter Service. 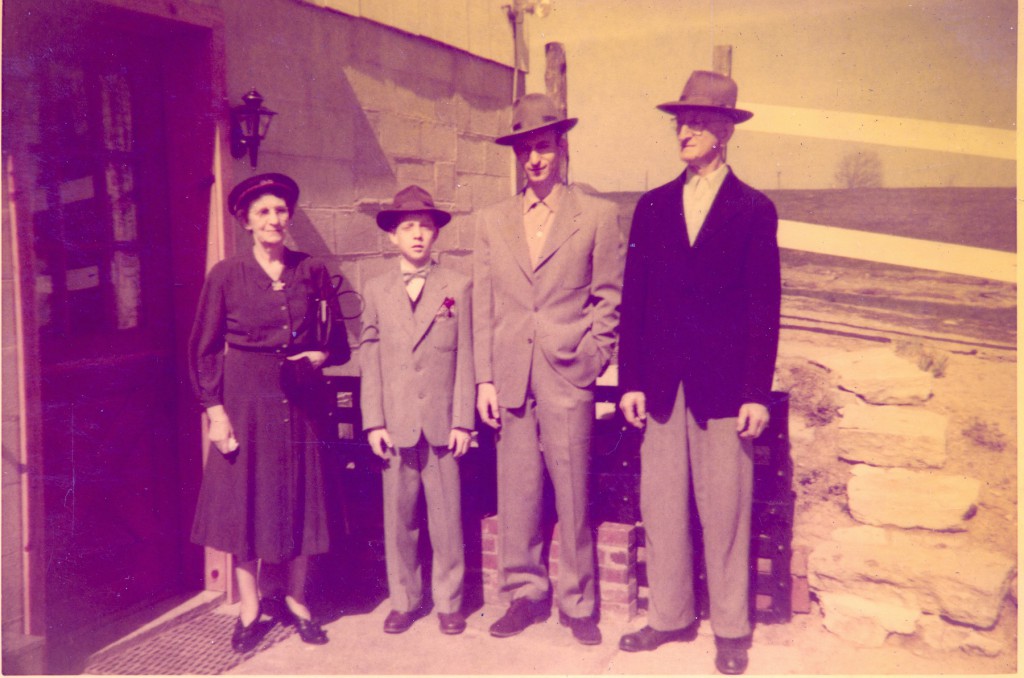 Grandma, Me, Dad and Grandpa Wolff on Easter morning after church. Grandpa Wolff was 77 years old and at 6 foot 3 still very active and agile. Grandma Wolff was 69 and very spry. Many times Grandpa would take the Trailways bus from Anderson and come work on the Barn or yard. He almost had a problem on one such trip when he decided to bring his big scythe with him to cut down the weeds around the Barn. After some discussion, it was decided to put the scythe under the bus in the luggage compartment for safe keeping! (You youngsters may want to Google or Wikipedia “scythe”.)

Grandpa and Grandma Barrett were down from Chicago Heights every chance they got. Grandpa would be 63 years old and Grandma 56 this year. Grandpa was also tall at a good 6 foot 2 and very active and hard working in their machine shop. They looked forward to preparing a small plot for a garden this spring, south of the chicken house. They usually showed up with a trunk full of plants and tree saplings which they helped us plant.

We were glad to be upstairs with bedrooms, more space and a new dial phone. We were still on a party line but we could now dial our own phone calls. Our number was 525-R, the “R” meaning rural. We didn`t own the phone. It was leased from Ma Bell. When we wanted to make a call we had to check for a dial tone and make sure no one was on the line. Long distance calls still needed an operator. Dial zero and wait for the operator to come on line and then ask for long distance and state whether we wanted a person to person call or anybody that answered. We also had the option of reversing the charges if the callee accepted the charges. 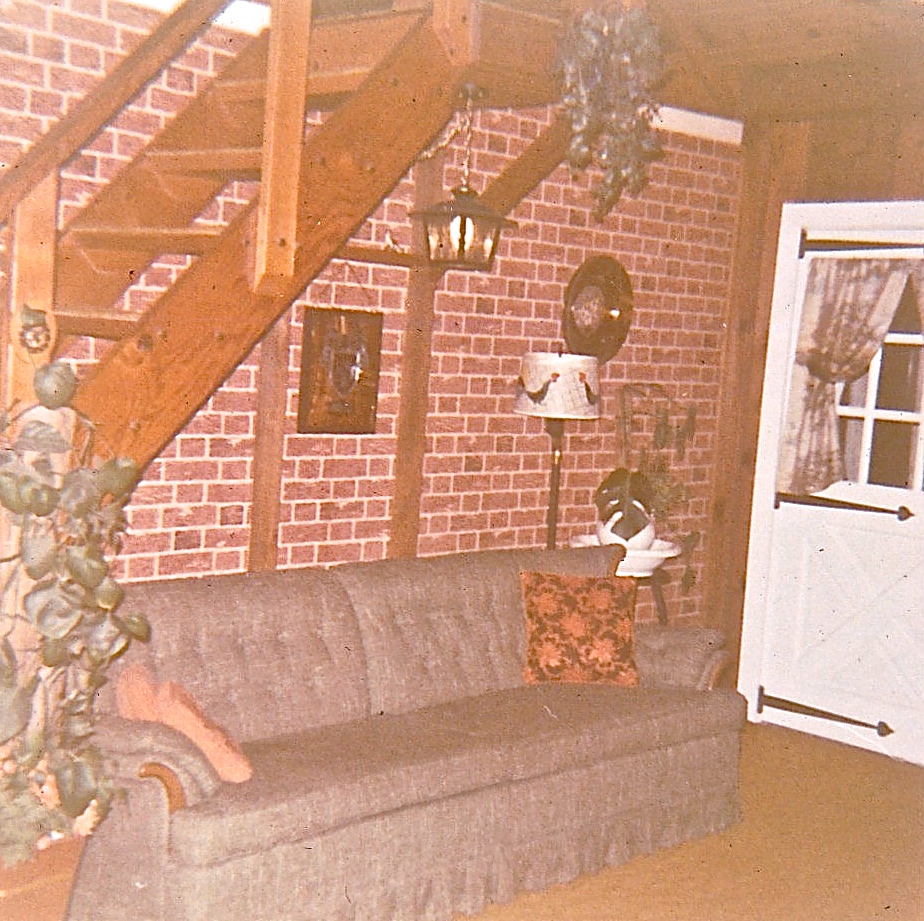 This was a later photo but the only one that shows the stairway going up to my open beamed bedroom loft. The brick wallpaper is on the master bedroom. 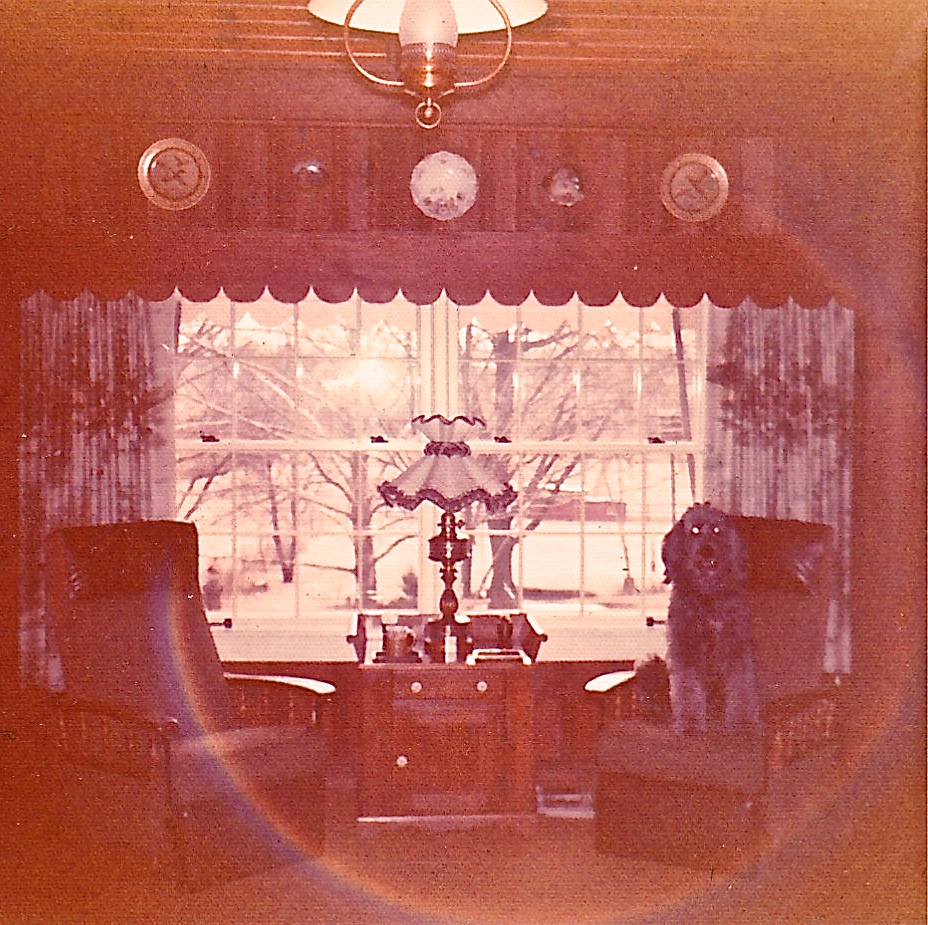 This is the double window in the living room looking out to the back yard and fields.

With the upstairs nearly finished and the weather breaking our time was well spent outdoors and Mother was already adding to our menagerie. 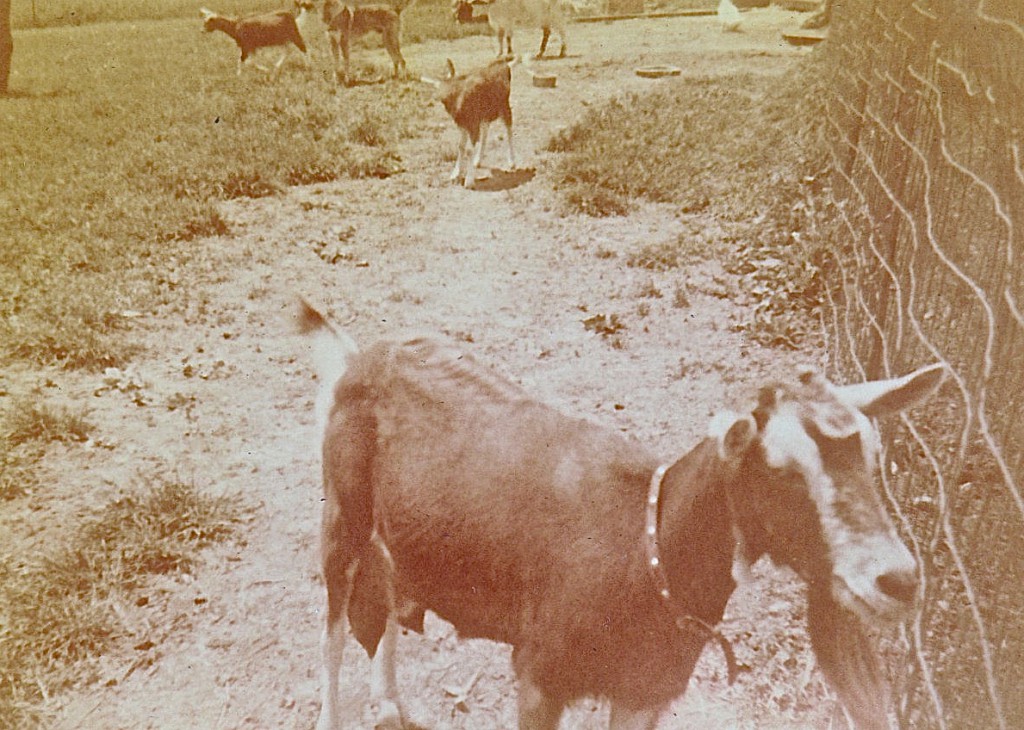 Nanny and her kids joined another goat that Dad had gotten earlier from a friend at work. Mother and I learned how to milk Nanny and we drank rich goat milk for quite some time. It went good with the big duck eggs we gathered from Daisy and Lazy. If a recipe called for two eggs, we only needed one!

School wasn`t quite out for the summer but we four boys spent as much time outside as we could. Exploring the creek and the woods out back was a daily adventure and springtime brought the new challenge of kite flying. The field next door had a high hill which provided open spaces and a great wind updraft. Four kites flying at one time introduced the fun of kite fights with newspaper and scotch tape on hand for  the many needed repairs.

Steve had the only paved driveway and basketball goal, so his house was the basketball arena. Our front pasture/yard, which Dad kept mowed by hand, was the only large open area for baseball games. We made a wire fence backstop and a pitchers mound. The turf was rough and fielding ground balls was always an adventure. That`s how I broke my front tooth in half that first summer!

I had other mishaps and bruises playing in the great outdoors, but the one that scared Mother the most was a fall I took one afternoon

after Dad had gone to work. One of the old Madison County jail doors that Elmer had salvaged from one of his projects became a landscape backdrop for the kitchen porch. It also made a great place for me to practice my balancing walk on it`s edge. Only today I fell with my knee gouging into the corner of the door and puncturing a triangular shaped hole beside my kneecap. With no car and in no-mans-land between Anderson and Pendleton, Mother called the Indiana State Police Post in Pendleton. A trooper came out and drove us to Saint John`s E.R. where they cleaned the wound, sprinkled some sulfur powder on it and said to be more careful. I was lucky, no stitches just a badge of honor scar to go with my cinder imbedded scar.

This spring it turned out that we four each had new BB guns. We spent a lot of time down at the creek shooting at leaves and twigs as they floated by. As we became more proficient at hitting our targets, we advanced to a more precise game. War games!! Naturally we were such accomplished marksmen by now, what could possibly go wrong? Surely the safety rules of no shooting above the waist would protect us from any harm. Without our parents knowledge or consent we managed to survive without any serious injuries. 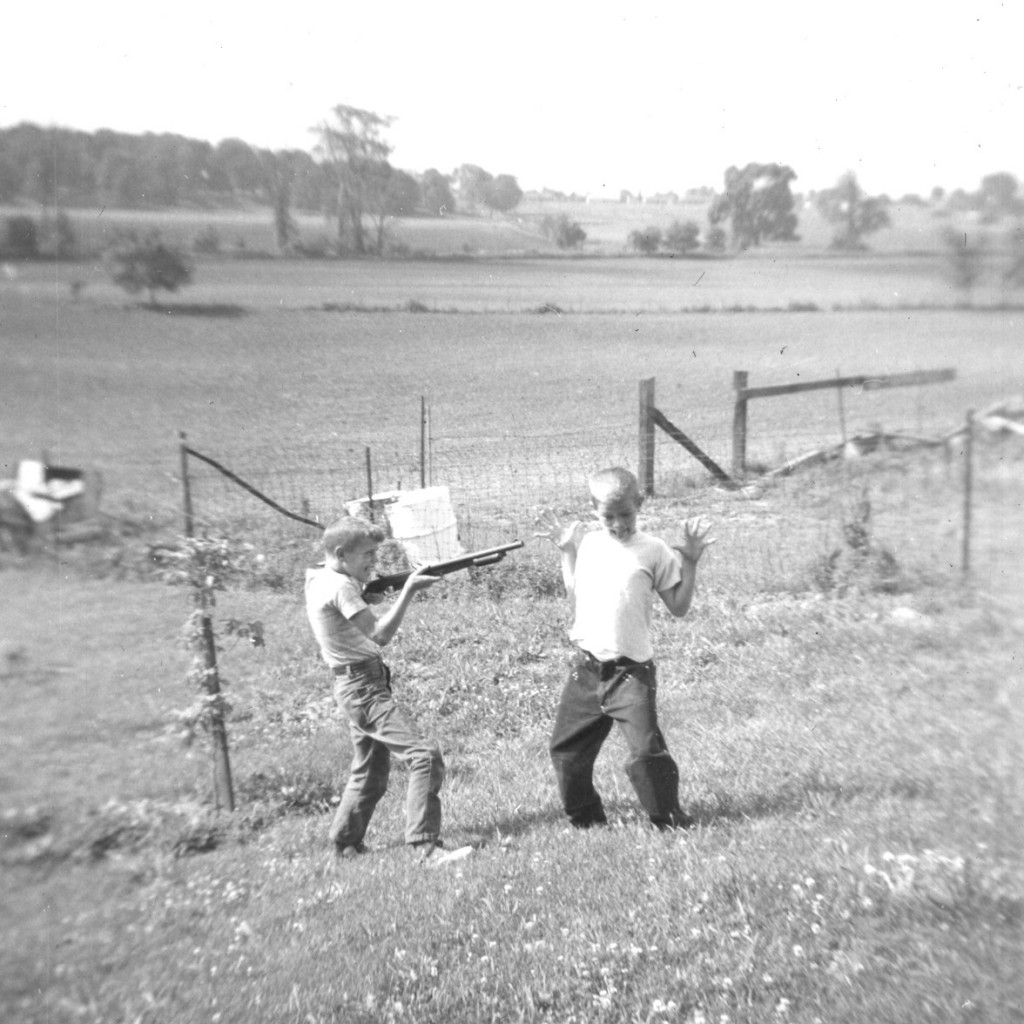 With all of  this mayhem going on, Mother, Dad and Doyle continued making progress on landscaping and finishing upstairs work.

Another of Elmer`s salvage items found it`s way into the landscape. The water trough was buried into the back yard slope and turned into a water feature and flower bed.

I have no idea of how these cement rollers were manhandled into position and landscaped with the water trough. I obviously was off on some adventure. 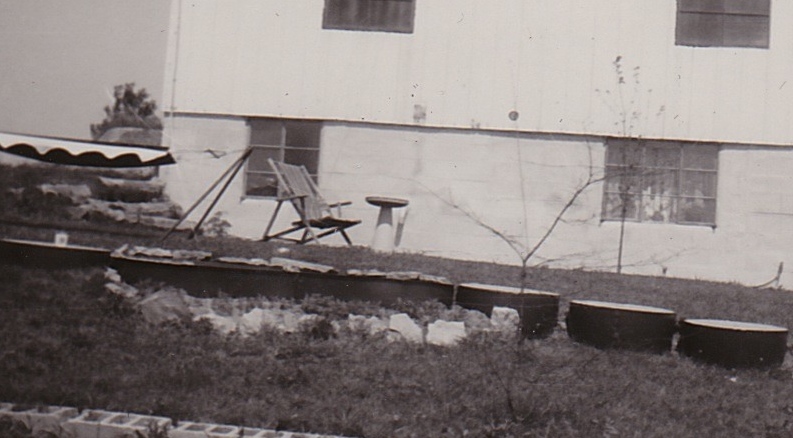 These steel banded cement rollers were made to be connected together with an axel through the center pipe in the cement. Once connected together at the proper width they were pulled behind a bulldozer to roll out and pack down the base material for a road or runway. Elmer must have used these in his construction business. Now they serve as seating areas around the water trough.

This also served as the base for the kitchen patio entrance. 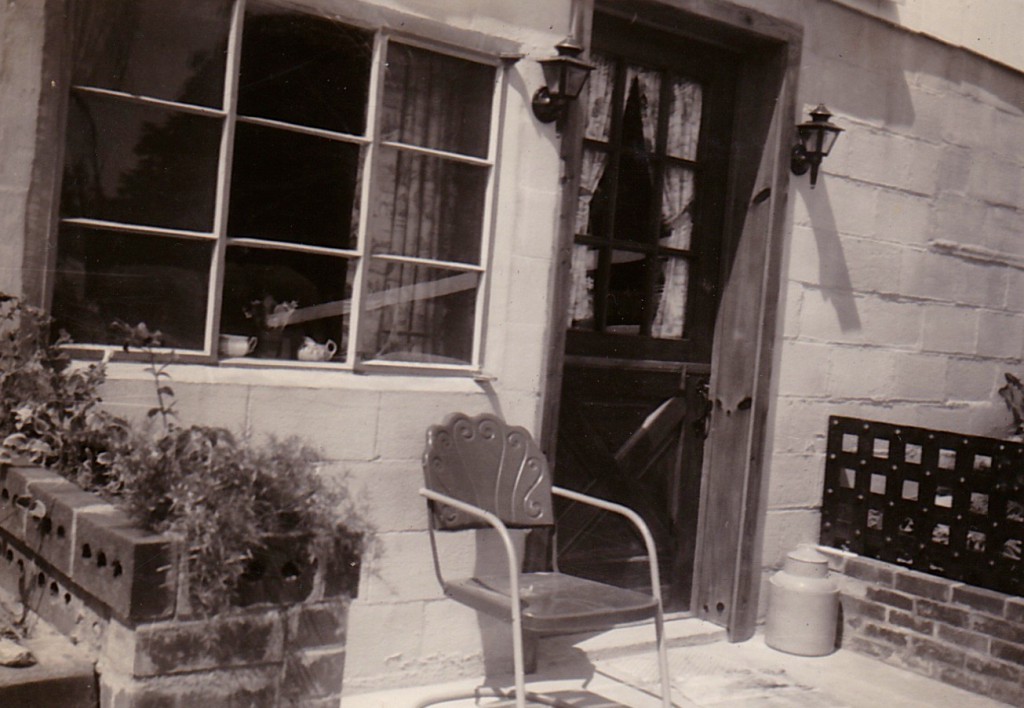 It seemed like a long time ago, looking back at the quonset hut days…but then time flies when you`re having fun!!

The cement porch area was finished and it was decided it was time to make our barn house “The little Red Barn” they dreamed of. We all pitched in on this project with Doyle tackling the high peaks.

As was usual, Dad engineered the weather sealing of the 1×12 redwood vertical plank siding. Each seam had to be caulked and then 1×2 furring strips were  nailed over the seams before painting.

The early Barn House plans that were sketched out on scale grid paper called for a den addition on the high end of the barn. This just happened to be the end with a big dirt mound drive for the tractor to have access to the loft. Start shoveling!

We bought a David Bradley tractor which was very versatile. It was designed to mount various accessories to the front or rear of the tractor frame. This tractor became our trailer, plow and front blade grader and snow plow. 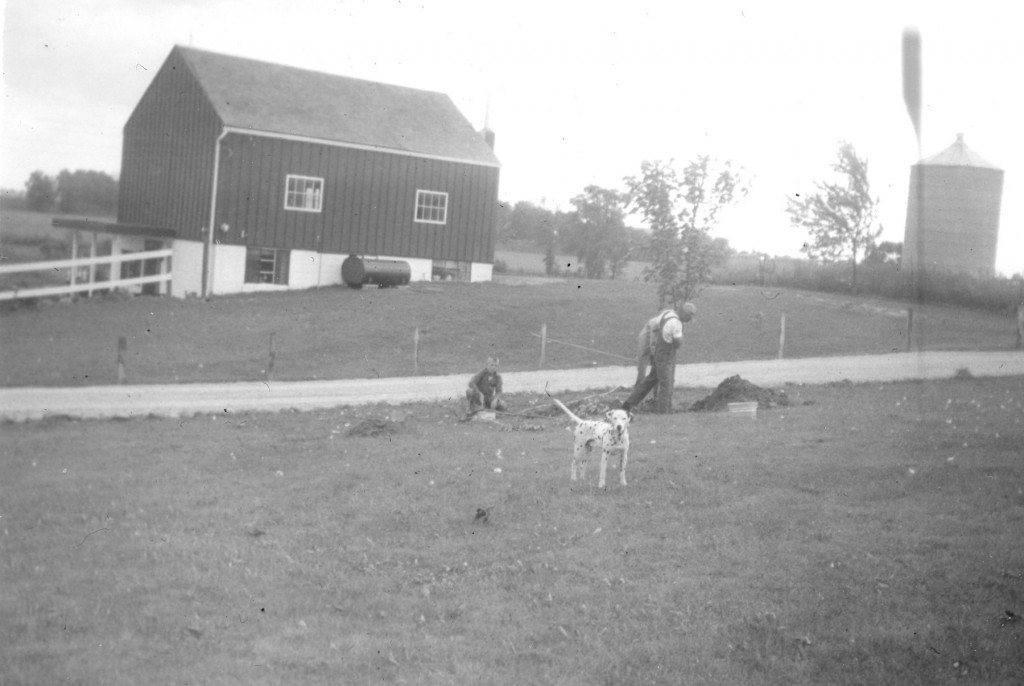 Grandpa Wolff came out to offer his masonry skills he learned while helping build the original Gospel Trumpet building in Anderson. We were in need of a chimney for the oil furnace. 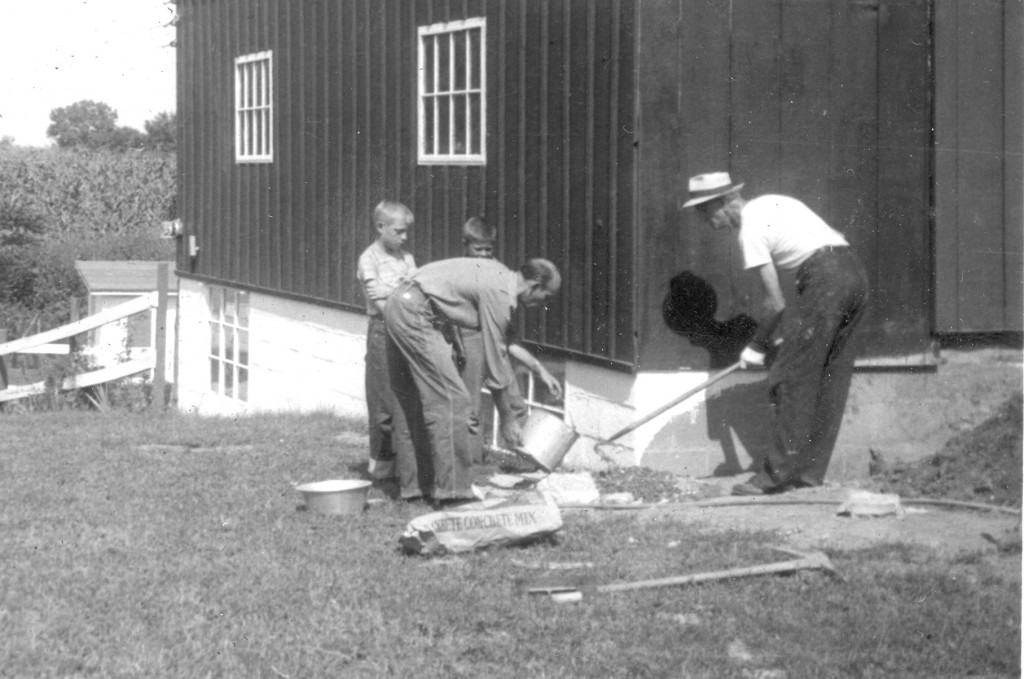 Mixing the footing for the chimney blocks required a supervisor. We did have a powered cement mixer to mix the mortar and later the cement for the den floor. 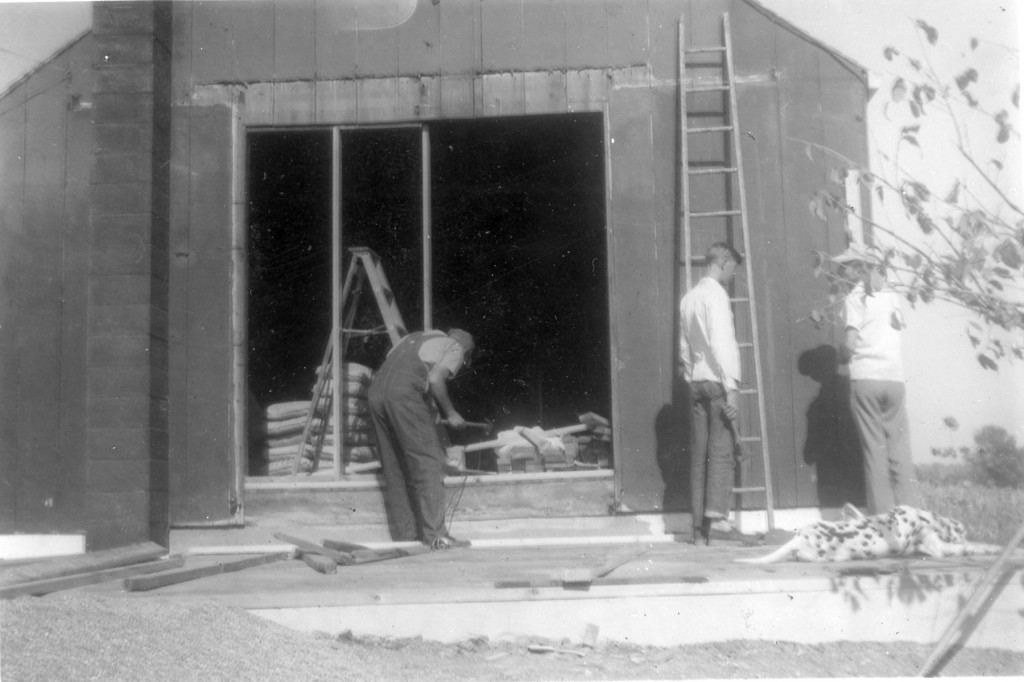 The foundation blocks were laid and ready for the cement floor to be poured. Grandpa Barrett helped with the framing to close off the barn doors. When Doyle wasn`t busy helping us, he worked at the Flower Shop for Leona. 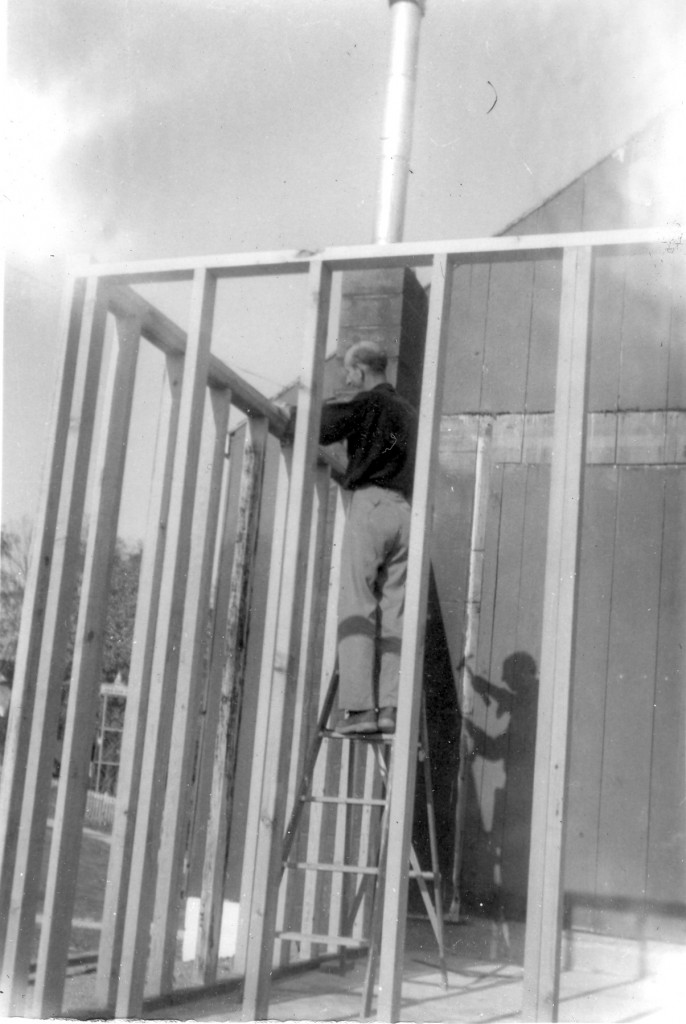 Our future den for the Wolff`s Den! 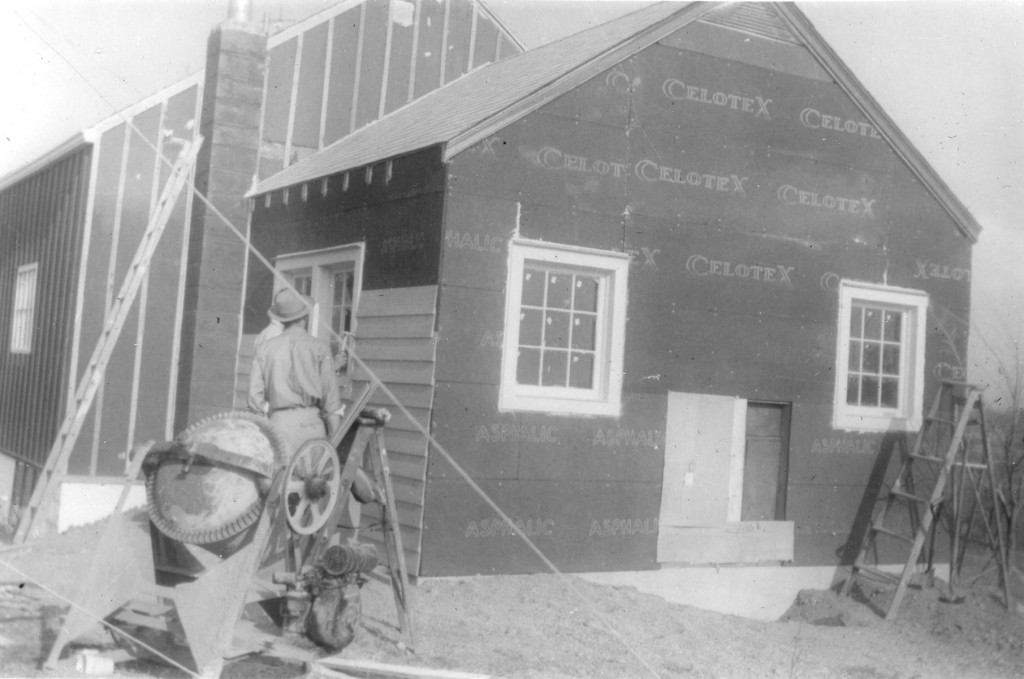 After the Den roof was flashed and attached to the Barn, the remaining furring strips were added. The opening for the Franklin wood/coal burning stove insert is on the end of the den. School was out for the summer and I was kept busy shoveling gravel and cement and carrying wood scraps to the burn pile.

After our ordeal with my fall and not having a car here, Dad bought a 1940 Buick Super Coupe for a second car. Of course he had to upgrade it to his satisfaction.

We continued work on the den while still taking time to landscape and plant 17 more trees this weekend.

One great, fantastic, fun filled, summer adventure was coming to a close. School was about to begin for my sixth grade. It was awesome to be in the same school with the same friends for two years in a row! I am the buzz head on the right end of the second row.

For the sixth grade, we were moved from the grade school to the basement floor of the high school. Big kids now even though we were not allowed upstairs.

I received my first corporal punishment in school with a quick whack from the teacher. She had left the room and I turned around in my desk with my knees in the seat to talk to the kid behind me. Nobody gave me any warning as she snuck up behind me and delivered the blow with her paddle. “Corporal punishment” means the moderate use of physical force or physical contact by a teacher or principal as may be necessary to maintain discipline or to enforce school rule. Now if the school rule was enforced in the principal`s office, the office door remained open so that the reverberating whacks could be heard all up and down the hallways.

Evidently talking, whispering or communicating was really frowned upon! This was only my second time to get caught talking in my long history of talking in schools. The other time was when I mistakenly thought that the boys restroom was a freedom of speech area. The second grade teacher at Seventh Street School grabbed me by the chin as I came out of the restroom and proceeded to chew me out in a manner I thought was way more disruptive than the infraction that I committed. Her only problem was that she left scratches on my chin and when Mother noticed them and heard the story, the phone line to the superintendent`s office was humming. Needless to say, I never did learn to keep my mouth shut!

Prince loved to get into everything and this required many bathes if he was to be allowed in the house.

As fall approached, Grandpa and Grandma Barrett still came down almost every weekend as we continued work on the Den and more landscaping. The Franklin Stove served as an outdoor cook stove and gathering area prior to its` installation in the Den.

We stapled Kraft aluminum foil backed insulation to the Den walls in preparation for the knotty pine planks to be nailed up. Mother and Dad designed and built a fish pond into the corner of Den with brick and waterproof painted block.

The Franklin Stove was the next project to be completed.

I still can`t believe all that was accomplished in one short year! With Dad driving 60 miles a day to work and back while working much overtime with little sleep, it seems an impossible task. It took the two of them and a joined dream to bring it all together and there is still much more to accomplish!